I treat charts with a great deal of reverence, bordering on mysticism at times. But there are times when even I am incredulous that a given object on a chart actually has any say-so in what the price is doing.

I was reminded of this tonight, because I noticed a strange blue trendline on a chart whose purpose I didn’t remember. I zoomed back to a bigger time period, and the anchor points still weren’t clear. Only when I backed up a full decade did I see the line, and it turns out to be the supporting trendline for the entire ES uptrend. 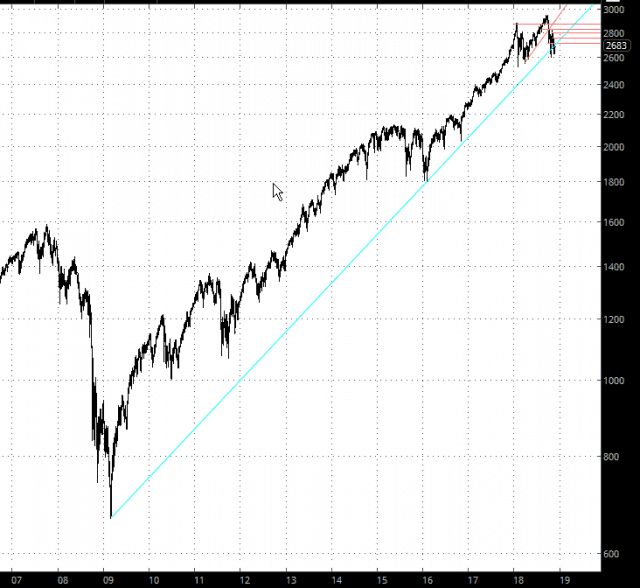 Returning to the intraday chart, I was quite captivated by how “obedient” even the very short-term price bars were with respect to this trendline. It last found support (and remember, this support goes back a decade) where I’ve put the green arrow on the left. It then went through a “phase change” (green tint) in which the line’s purpose changed from support to resistance. Even during the wee hours of Tuesday morning, with that instant 25 point ES spike, it stayed beneath it, and at the highest peaks on Tuesday, it approached, but was repelled by, this line. 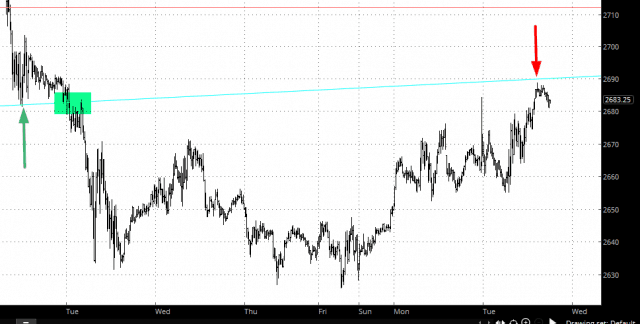 I’m not fully convinced. One strongly-worded tweet from the President could send the ES ripping right over this blue line. Until then, however, I’ll be watching it closely.