I wanted to start off by first saying we have really clamped down on security on the site. As Slope has become increasingly popular, it also has become of greater interest to automatic “bots” that try to break into sites (just FYI, no financial or payment information is stored at Slope, so frankly there’s no particularly useful data to steal anyway!) In any case, we’ve made a number of security improvements, including the fact that you have to solve a simple math problem in order to log in now: 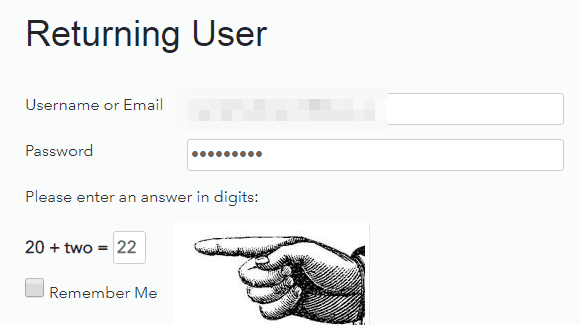 Once you’re logged in, there’s no real reason you should log out, so don’t bother unless you really want to do so. I wanted to bring your attention to this change, however, since it’s easy to miss. You might want to just check the “Remember Me” checkbox.

Monday wasn’t a great day for me. Not a wreck, because I’m fairly lightly positioned, but definitely a loser. October was just fantastic, but frankly I’ve spent much of November making and losing the same wad of cash, over and over again. It’s become tiresome. So, ahead of the G20 nonsense, I’ve lightened up considerably.

Looking at the NQ, it seems to me it could easily tack on another 150 points or so. I find it comic (in a gallows humor sort of way) that Nancy Pelosi bought up millions of dollars in AMZN and FB calls last week. You can imagine how much she’s made already, with more probably on the way. Being a politician really pays, doesn’t it? 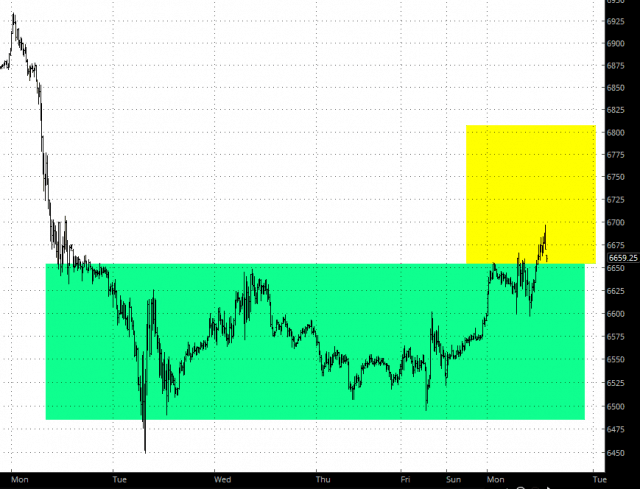 The bullish base on the ES is just as clean. There are easily another 40 points of pain in store for the bears. Let’s face it, the market has been beaten to smithereens, and Monday’s powerful bounce could be just the beginning of something larger. To be clear, I think we’re in a bear market, but countertrend rallies are just part of life when it comes to bear markets. They’re vicious, violent, and quick. 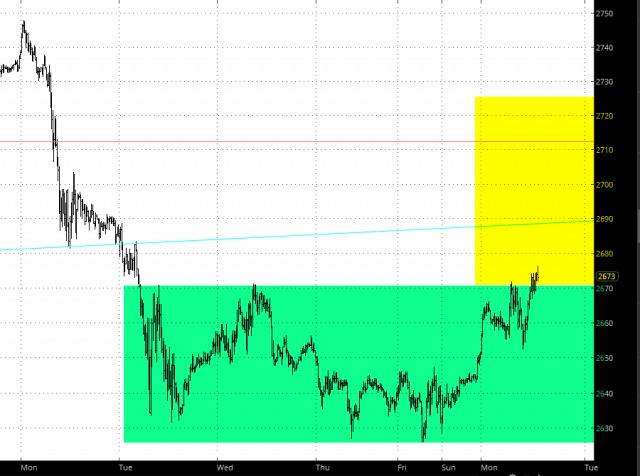 The measured move on the ES is something a little north of 2710. I glanced at a larger graph, and sure enough, a little above 2710 just happens to be precisely where one of my key horizontal lines is located. So it would actually be a very “chart-friendly” move for the ES to get up there, as uncomfortable for me as that would be. 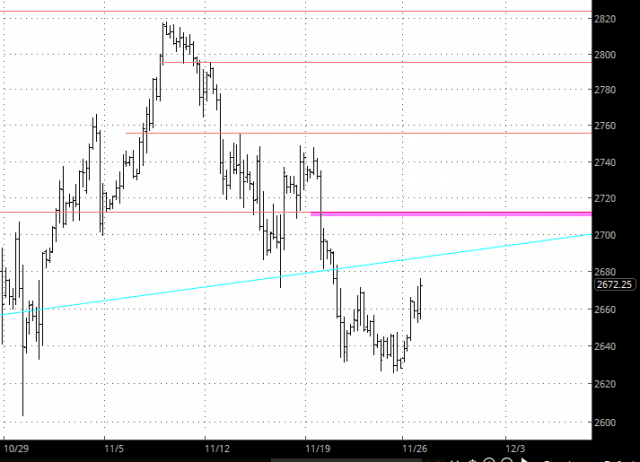 I, for one, will be glad when the G20 is in the rearview mirror, although I’m guessing they just issue some kind of milquetoast statement about how they’re still talking, and we’ll just need to keep waiting throughout December for some kind of surprise “announcement” to finally come out.

BREAKING NEWS: Trump has made it clear he could tack tariffs onto the iPhone and he’s not about to back down from 25% tariffs at the start of 2019 unless the Chinese cut him a deal. The ES and NQ are giving back some of Monday’s gains in early trading.