Here are four stocks with strong technicals lifted by earnings and other news.

CareDx, Inc (CDNA) jumped $1.56 to $26.11 on over $1 million shares traded Wednesday, more than 1 1/2 times its average volume.  The transplant diagnostics company is scheduled to report third quarter results on November 8.  The move popped the stock out of a month-long coiling pattern.  A move through the October 1 high near $19.50 could accelerate the stock towards the channel top in the high-$30’s.

FireEye, Inc. (FEYE) leapt $1.64 to $18.49 Wednesday on huge volume of 18 million shares, 3 1/2 times its average volume.  The cybersecurity company released better-than-expected third quarter results after the close Tuesday. The stock appears to be emerging out of a multi-year basing pattern.  Resistance is at the April high of $19.36.  A move through that could get the stock towards the channel top at around $22.

Tandem Diabetes Care, Inc. (TNDM) rose $2.92 to $37.61 Wednesday on 2.2 million shares.  The developer of insulin delivery systems is scheduled to report after the close today.  Wednesday’s move broke the stock above the declining tops line from its pullback off the September high.  The stock faces next lateral resistance just above here at $37.70, and then minor resistance at $40.50, a move through which could accelerate it higher.

Xilinx, Inc. (XLNX) gained $3.32 to $85.37 Wednesday on 5.7 million shares, more than twice its average volume.  The maker of programmable chips reported better-than-expected earnings last Wednesday, and also has reportedly won orders from Microsoft Corp.’s Azure cloud unit.  The move broke the stock out above recent highs from early October, positioning it for a move next towards the rising channel top near $92.

BONUS CHART from Tim, unrelated to the above: Japan (DXJ) is following the Fibonacci retracements lower quite cleanly. 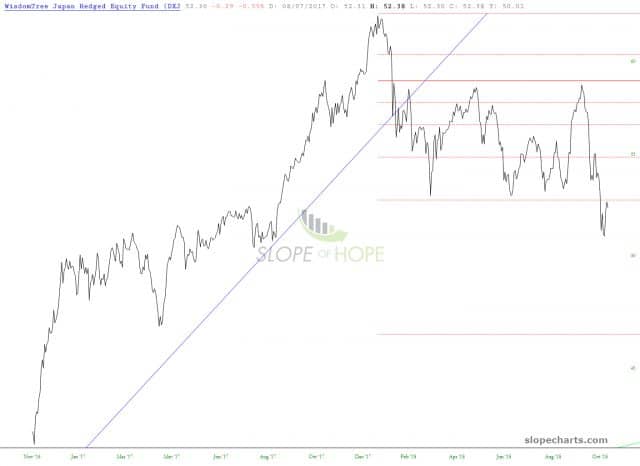 https://slopeofhope.com/2018/11/four-stocks-to-watch-on-earnings-other-news.html
Four Stocks to Watch on Earnings & Other News