Screen grab from another Marvel Avengers Endgame meme, this one featuring cryptocurrencies.

In our previous post (How The Next Crash Happens), we speculated that a crash in Bitcoin might trigger the next market crash. Bitcoin and most of the next-largest cryptocurrencies promptly dropped double digits.

Screen capture via Crypto Compare although CryptoStream is way better

Why A Bitcoin Crash Was On Our Radar

Time will tell if this was just a pullback or the beginning of a big Bitcoin crash. But as we mentioned last time, our Twitter correspondent Anatoly Karlin’s recent prediction of a big Bitcoin “long winter” caught our attention for two reasons.

And, second, because Karlin’s predictions about COVID-19 last year were prescient. We quoted the physicist/anthropologist Gregory Cochran in our first warning about the novel coronavirus last year.

But we quoted Anatoly Karlin’s post (“Corona Will Kill Millions And Crater The World Economy”) in our second COVID warning.

And considering that Corona has killed nearly 2.5 million globally, and, according to a Statista estimate, caused a 4.5% contraction in global GDP in 2020, Karlin was on target about it. Hence our attention to his Bitcoin warning.

How Bitcoin Could Lead To A Market Crash

In a nutshell, if enough large companies put Bitcoin on their balance sheets and then the Bitcoin long winter hit:

If Bitcoin crashed tomorrow, it might not cause a market crash. What would make the stock market more vulnerable to a Bitcoin crash would be broader corporate exposure to Bitcoin. That may be starting to happen. In a recent post, we mentioned how the CEO of one of our top names, MicroStrategy (MSTR), convinced the CEO of another of our top names, Tesla (TSLA), to add Bitcoin to Tesla’s balance sheet. 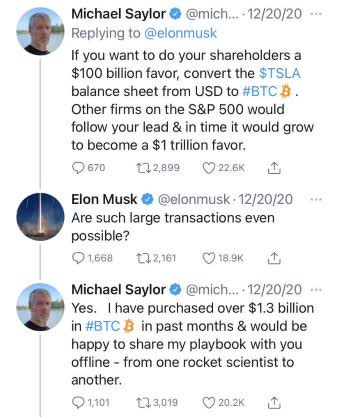 Earlier this month, MicroStrategy CEO Michael Saylor spread his gospel to representatives from thousands of other corporations.

What happens if dozens of the largest S&P 500 component companies add Bitcoin to their balance sheets, and then Karlin’s prediction of a crypto bust comes to pass? Nothing good, for those companies’ shareholders. That’s how a Bitcoin crash could cause a market crash.

If this is the beginning of the Bitcoin long winter Karlin warned about, the stock market may have dodged a bullet with it happening now. That is, before Michael Saylor succeeded in getting Bitcoin onto more S&P 500 component balance sheets. If it’s just a pullback, he’ll have more time to do that on the next leg higher.

Investing From The Viewpoint Of Calamity

Last time, we wrote that our system had been bullish on Bitcoin-related names on Friday. We said that if you indicated you had $2,000,000 to invest and were willing to risk only a 20% decline over the next six months, the hedged portfolio it presented then would have included some Bitcoin-related names.

Screen captures via Portfolio Armor as of the hedged portfolio we presented in our last post. Data as of Friday’s close.

Digital Turbine (APPS), Baidu (BIDU), Enphase Energy (ENPH), Li Auto (LI), RIOT, Square (SQ), and TSLA were selected because they were among our top names – the ones that had the highest potential returns, net of hedging costs, when hedging against a >20% decline on Friday. The last three names there had Bitcoin exposure, with Jack Dorsey’s Square having added Bitcoin to its balance sheet before Tesla did. Our system started with roughly equal dollar amounts of each, and then rounded them down to round lots, to reduce hedging costs. It swept up most of the leftover cash from the rounding-down process into another LI position (this time tightly collared) to further reduce hedging cost.

On our website, if you click the plus signs in the portfolio above, the positions expand to give you a better look at the hedges. For example, this is what the Square position looked like expanded.

As you can see, SQ was hedged with optimal puts. The other positions were hedged with optimal collars. Our system estimates returns both ways to determine which type of hedge is best. We elaborated on that process in a recent post: When To Hedge With Puts Versus Collars.

A Bad Day For Those Stocks

RIOT and TSLA were likely down on the Bitcoin drop. Tesla’s drop affected other electric vehicle makers including its Chinese competitor Li Auto (LI).

On average, the underlying securities in our hedged portfolio from Friday were down -6.32% as of Monday’s close.

Not As Bad A Day For The Hedged Portfolio

Before we show the value of the portfolio on Monday, let’s look at how we valued it on Friday, to illustrate a conservative assumption we make about options prices.

Value of the hedged portfolio as of Friday’s close.

To be conservative, we assume the investor placed his hedging trades at the worst ends of their respective spreads: that he bought the puts at the ask, and sold the calls at the bid. We then track the daily performance of the portfolio valuing the options at the midpoint of their bid-ask spread or their intrinsic value, whichever is higher. Because of that, this portfolio’s performance starts in small hole, down 0.68%.

This was the value of the hedged portfolio as of Monday’s close:

So on a day the underlying securities were down 6.32%, the hedged portfolio was down only 2.72% (even though this portfolio was only hedged against >20% declines).

As we noted last time, our system doesn’t make top-down macro calls. Instead, it analyzes every stock and ETF with options traded on it in the U.S. every trading day, based on their total returns and options market sentiment on them. And each trading day we rank those names by our estimates of their potential returns over the next six months, net of hedging costs. Nevertheless, that bottoms-up process results in some broader macro trends. And one of the recent ones is bullishness on Bitcoin-related names.

A couple of examples of that we mentioned were MicroStrategy (MSTR) hitting our top ten on December 17th of last year,

And RIOT hitting our top ten about a month later.

As of Monday’s close, both RIOT and MSTR were on our top ten, along with a few other Bitcoin-related names, along with cryptocurrency bank Silvergate Capital (SI) and the blockchain ETF (BLOK). We’ll be curious to see if they are still in our top ten Tuesday night if crypto extends its losses Tuesday. `