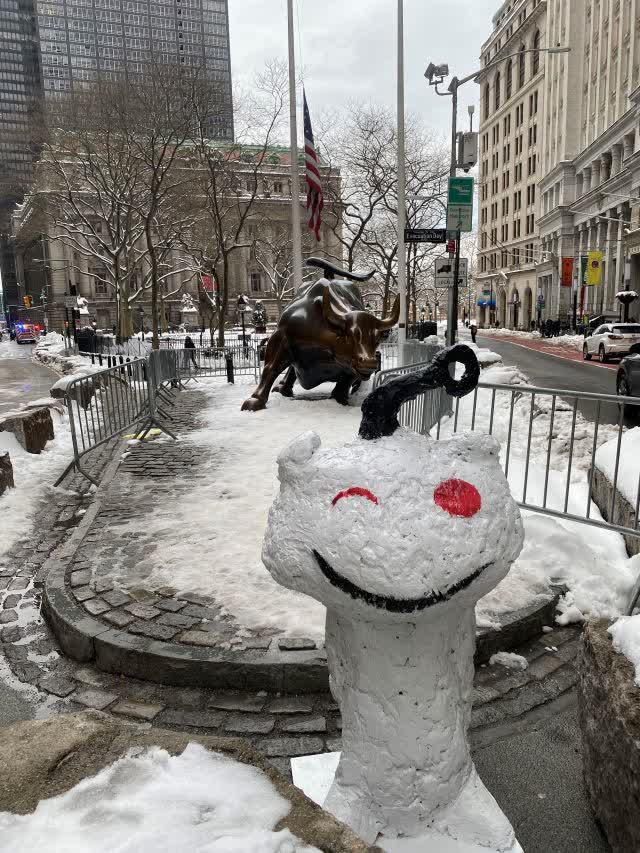 A snowman in the shape of the Reddit alien in front of the Charging Bull statue in Manhattan’s financial district (image via r/WallStreetBets).

The Trade Of The Decade

Even if you held until GameStop (GME) shares dropped back into the 90s this week, if you had bought long-dated, far OTM calls on the stock when it was trading below $5, you would have made a fortune. Keith Gill, aka “DeepF*ckingValue” and “Roaring Kitty” turned a five-figure stake into eight figures. Why didn’t you? One possible reason is you didn’t know about it then.

Why You Didn’t Know About It

Maybe you don’t get your investment ideas from a crazy Reddit page called r/WallStreetBets. Maybe you get them from respectable sources such as Bloomberg, CNBC, or the Wall Street Journal. At this point you might be thinking they didn’t know about it either. But on Sunday, July 19th, 2020, Keith Gill handed it to them on a silver platter. GameStop had closed at $3.96 the previous Friday.

Let’s look at some of the folks who got handed the due diligence on the trade of the decade and ignored it (or worse).

We added the “or worse” category for Portnoy, because not only did he ignore it, but he got into GameStop and other meme stocks late and lost about $700,000.

The author of “What Works On Wall Street” ignored it.

Joe ignoring this tweet explains why you didn’t hear about the trade on Bloomberg last summer. To Joe’s credit, he acknowledged his miss on Twitter on Wednesday, which is what alerted us to Gill’s original tweet.

Santoli is half of the reason why you didn’t hear about this on CNBC.

Jim Cramer is the other half of the reason why you didn’t hear about this on CNBC. Booyah!

Jason Zweig is why you didn’t hear about it in the Wall Street Journal. We’re reminded of the classic quote by Howard Aiken,

Don’t worry about people stealing your ideas. If your ideas are any good, you’ll have to ram them down people’s throats.

What If You Had Heard About The Trade?

Maybe you would have ignored it, the way the folks above did. Who the hell is this guy “Roaring Kitty”? You’d never heard of him. He wasn’t affiliated with any brand or company you trust. We hadn’t heard of him either.

As we noted in a post last week (GameStopped), we first heard about GameStop from one of our subscribers in late December, when it was trading at about $20 per share. It didn’t pass our screens then, and we were unaware of Gill’s due diligence on it.

We did find a few other winners for our subscribers last fall, though. Plug Power (PLUG) is up 187% since it first made our top ten on November 12th.

And MicroStrategy (MSTR) is up 149% since it made our top ten on December 17th.

In our previous post, we mentioned we thought all three had more room to run. As of Wednesday’s close, our system had cooled a bit PLUG and NNDM, but MSTR was again one of our top ten names.

How To Find The Next Great Trade

In general, there are two ways you can approach this, systems and people. If you have a system that reliably finds big winners, that’s probably worth sticking with. The other approach is to find people who reliably find big winners. Maybe Keith Gill will be one of those people. Michael Burry, who famously made a fortune shorting subprime mortgages before 2008 and made another fortune betting on GameStop last year is certainly an investor to pay attention to. He’s arguably the greatest investor of his generation. But he warned GameStop was a uniquely perfect set-up, and there won’t be another like it (another reason silver likely isn’t the next GameStop). And Burry has also been bearish on Tesla, which is up nearly 600% over the last year (our system has been bullish on it since last May).

Perhaps you can find the next Keith Gill. Check your mentions – he might be tweeting at you now.

https://slopeofhope.com/2021/02/until-it-was-too-late.html
Until It Was Too Late