The ES H&S pattern continued to build yesterday with a perfect reversal at 1186-8 resistance, and the right shoulder of the pattern is almost complete. Worth noting on this chart as well is the series of rising blue trendlines that ES has been falling through and retesting each time. That gives us our first resistance zone today in the 1178-80 area. Key resistance is still at 1186-8 and key support is at 1166-8. A break of either key level should signal the start of a significant move in that direction: 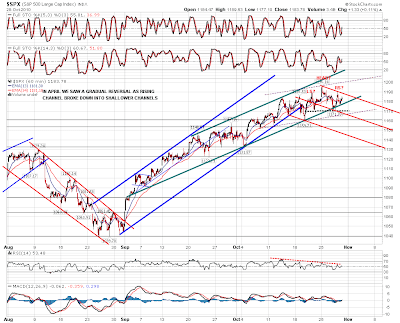 There was a big rally in the USD currency pairs yesterday that was worrying me, as a major breakdown in USD right here would most likely derail this retracement scenario. These moves have reversed nicely overnight though and no serious technical damage was done to suggest that the bounce in USD has finished. Here's the EURUSD 60min chart:

GBPUSD was the strongest of the USD currency pairs that I was watching yesterday. This has reversed overnight and I'm watching this carefully to see whether the current rising channel can be broken. If not then GBPUSD at least could make a new high soon:

This late October retracement isn't a done deal yet, but it is looking extremely promising now. To confirm it a break with conviction of 1168 ES is needed. On the upside, a break of 1178-80 ES would weaken the retracement scenario significantly, and a break of 1186-8 would kill it off altogether in its current form. I'll be watching those levels today and obviously today's GDP numbers could push this decisively onto one path or the other.