It was Ben Bernanke, from a helicopter, with a printing press!

Cluedo jokes aside though. I've been looking at the technical picture on USD and it really is starting to look very grim. The Fed is inflicting damage to USD, and IMO at least to the long term health of the US economy, on a scale that Osama Bin Laden could only dream of managing. Ben Bernanke could well succeed in doing to USD what the PIIGs have failed to do so far to the Euro.

After breaking support at the 61.8% fib retracement of the USD rally, a new low is looking very possible. If we take three or four months to reach it, then the wedge target would be at the same level as the H&S target:

A similarly bleak picture in the inverse can be seen on EURUSD:

The picture looks marginally less optimistic on GBPUSD, where the big rising wedge that is forming looks potentially longer term bearish for cable at least. It is a monster pattern though, and GBPUSD could run up a lot further within it. I would point out though that rising wedges break up 31% of the time and that this rising wedge could also be an IHS with an upsloping neckline:

One thing I've been watching as the markets in the developed world have stalled in the last two weeks is how emerging markets and commodities have continued to run up. I've posted the rising wedges on GYX and EEM in recent days to show the big rising wedges on both. GYX continued up to hit the upper wedge trendline on Friday: 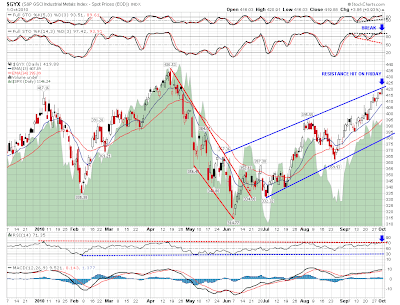 That looked encouraging for the bear side until I looked at the updated EEM chart, where the upper trendline has been hit and then gapped through. That could still be a wedge overthrow but this is not at all encouraging for seeing an interim top in the near future: 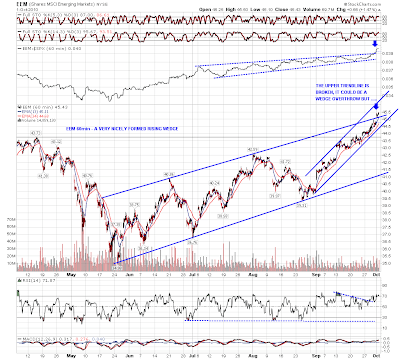 One of the few bright spots for bears at the moment has been the lagging financial sector, where XLF has been strongly underperforming SPX. I'm wondering though whether that is going to help the bears during what is beginning to look like a run on USD. That run on USD might help the bears only if the run triggers a general flight from all US denominated assets over the next few months, and it is possible that we are seeing the start of that at the moment: 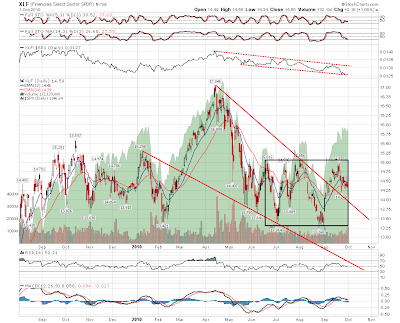 I was reading earlier this week that on current trends the Fed is likely to overtake both Japan and China within two months to become the largest holder of US treasuries in the world. Every dollar of that holding has been purchased with a freshly printed dollar, so in effect the US has just been printing money to finance the ever increasing fiscal deficits. That is a policy that, when sustained, has only ever ended one way historically. Ben Bernanke is determined to avoid deflation, and he has the tools to avoid it for certain. You should always be careful what you wish for however, you might just get it. 🙂

Anyway, just some weekend thoughts. It's my birthday today and I'll be going to a wonderful restaurant / pub with the family for a great lazy afternoon. This being the UK, the weather stinks of course, but we'll be staying inside. Everyone have a great rest of the weekend. (Note from Tim: Happy Birthday, SHJ! We love ya!)

https://slopeofhope.com/2010/10/who-killed-usd-by-springheel-jack.html
Who Killed the US Dollar? (by Springheel Jack)