It seems that almost everyone is bearish this morning, but on balance I'm leaning bullish now. December tends to be a bullish month for equities and unless we see some key support levels break down today or tomorrow, I think there's an excellent argument that wave 4 on SPX bottomed yesterday, and that we're watching the start of wave 5 up now. Pug's in agreement on his primary scenario unless we see a break downwards through triangle support.

After a very careful look at ES I think we're in a descending triangle, a bearish pattern that breaks downwards 64% of the time UNLESS price rises into the pattern, as it does here, in which case it is a continuation pattern, breaking up 73% of the time. Here are the stats on Bulkowski's site:

Whether the break is down or up, we're close to that break now and we may well see it today or tomorrow. The key support and resistance levels on ES and NQ are now:

A break with confidence up or down through those levels will signal a big move in that direction, though it is worth mentioning that triangles have a very nasty habit of making a fake break in one direction and then playing out in the other. Stops should be used carefully until the direction of the breakout is absolutely clear.

My 60min Vix chart, with a little right-angled and ascending broadening formation that I've posted a few times before made the latest peak yesterday just below 24. It may touch again slightly higher, but unless we see a break up through resistance, the next target is just under 18 for a fourth visit to that level: 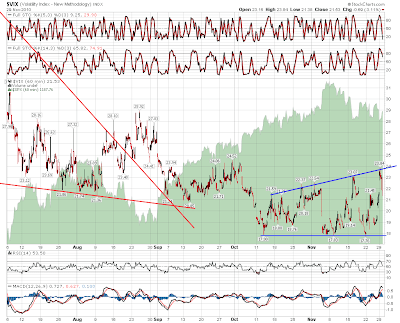 On my EURUSD chart my declining channel support trendline was hit overnight and has held so far. It is a weak trendline though, derived mainly from the upper trendline, and it may not hold long:

Now that being bullish on USD no longer carries a risk of forced entry to an institution for the cognitively disadvantaged I'm happily and firmly bullish on USD as we stand here. The USD trend has changed and my upside targets are 87 (weekly triangle) or 94 (weekly rising channel). Once we see a wave 5 up on SPX that should coincide with a retracement on USD, then the next big wave down on USD should deliver a matching big move down on equities, and that's what I'm looking for here.

We could easily break down rather than up on equities here though, and USD might move up to that 83.6 target without a significant retracement first. If so then I'll be looking for a target in the 1130 – 1150 SPX area. One way or the other I think there's an excellent chance that we will see the break today.

https://slopeofhope.com/2010/11/close-to-a-break-by-springheel-jack.html
Close to a Break (by Springheel Jack)