People often forget that officials lie as a matter of course, and that open government is, in consequence, always something of a joke. One of my favorite quotes is from a film or documentary about Watergate where an official was answering questions from a politician trying to establish who first suggested that there should be a cover-up. The official replied that 'no-one ever suggested that there might not be a cover-up', and I expect that was exactly right. Yesterday there were two stories coming out of Japan about the potential nuclear accident there. The official version was that everything was well under control, and the second was from outside experts saying that flooding reactors with seawater was a last ditch desperation measure that was most unlikely to succeed. No prizes this morning for guessing which assessment was correct.

That's worth remembering when we hear soothing statements from central bankers about the desirability of obviously reckless money printing and debt accumulation, or when they make statements about inflation remaining subdued against a backdrop of obviously accelerating price inflation. We should always remember the image of Comical Ali (Mohammed Saeed al-Sahaf), the hapless Iraqi Information Minister, making statements about the US forces being crushed in the late stages of the invasion of Iraq, with US tanks rolling into Baghdad clearly visible behind him as he spoke. All of these officials see managing expectations and soothing fears as their job, none of them seek to disseminate the truth. Comical Ali was perfectly representative of officials making statements to the press, and it has always been so. Doubtless one of Nero's officials was dismissing reports of Rome burning as scaremongering as Nero fiddled and Rome burned behind him. As a breed they would have to work hard on improving their reputation for honesty to compete with a four year old child in search of chocolate.

Looking at the markets this morning in the wake of reports that the stricken nuclear reactor in Japan is now releasing large amounts of radiation to atmosphere. I see that the Nikkei is down over 10% overnight, and there have also been heavy falls in other developed equity markets. Some nice technical lows are developing at support, but a friend of mine remarked this morning that he'd rather juggle angry badgers this morning than play the open, and I'm inclined to agree. It wouldn't take a lot to see a flash crash situation develop here and using stops looks particularly important today.

On ES the triangle target at 1252 was made overnight and ES is trying to make a short term low in the 1250 area. That might succeed short term, though I'm still expecting a test of the 1220-30 area before this correction ends:

NQ fell through the 2250 support level, and retested it before going lower. That looks ominous and I'm hoping that a broadening wedge I've identified on the NQ chart holds today. The H&S target is 2160 of course, which would fit well with my ES target in the 1220-30 area, so I'm expecting more downside regardless of any bounce here:

Looking at 30yr treasuries this morning I'm seeing strong signs that there will be more upside. Significant resistance has broken overnight and a very nice IHS has formed over the last few days with a target just under 124:

One big question this morning is whether the USD has enough credibility left to assume a traditional role as a flight to safety target with treasuries. Yen would normally be the third flight to safety trade of course, but probably not this time for obvious reasons. Looking at the EURUSD chart there is some sign that EURUSD may have made a double-top at 1.40, but we'll have to see a conviction break of 1.38 to confirm weakness:

The Nikkei is down over 20% in the last few days and is starting to look interesting. The current rising channel on this long term chart has broken overnight and I'm seeing strong trendline support in the 7700 area: 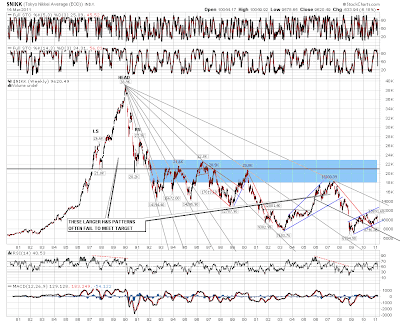 I posted a Vix 30 min chart the other day and the trendlines I drew on it have been holding beautifully. I'll be looking to see whether Vix breaks overhead resistance this morning and if it does I'll be expecting a move to the next resistance trendline in the 27 area: 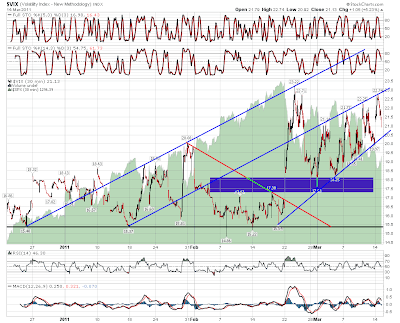 Overall I'm leaning towards a bounce here in the context of further falls later on, but it wouldn't take a lot to push this over the edge this morning so any longs should be cautious. The Ides of March are not always trouble free, as I'm sure Julius Caesar would agree.