The last trading day of the month is statistically very weak in sharp contrast to the first trading day, and going long on a close to close basis would have lost you an accumulated 69 points since March 2009, which is to say that the last day of the month has been a brutal one day per month bear market within the overall bull market. That could have been improved somewhat by just going long at the open on a gap up from the previous close, but even in that case, you'd be up only three points over the period. Here's the table showing the stats: 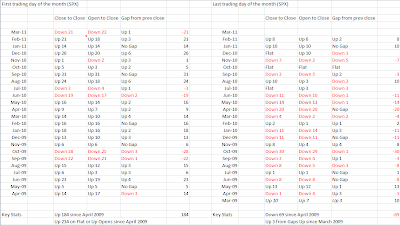 In summary, the historical odds for an up day today are poor, and the odds for a long taken out at the close tonight, and held through tomorrow unless there is a gap down from the previous close, are extremely good. On that basis the important support levels on ES and NQ are covered in yesterday's post, and I'll just mention that I'm seeing rising channel resistance on ES in the 1337-39 area in case ES beats the odds today and rises anyway.

As that's cleared some space today, I'd like to have a good look at copper, which I'm concerned about because it is divergently bearish compared to equities. I posted the current range levels yesterday, thinking as I did so that the obvious next move was to support at 426.5, and it moved there shortly after I posted the chart. It's been trading around there since then and is showing some encouraging signs of making a low, though I'm concerned that it is still in an overall declining channel, and the strongest short term trendline is the declining support trendline from 440. That support trendline now has five hits and looks a very good counter-trend long entry if it hits again, within the larger downtrend:

On the weekly chart the outlook also looks somewhat bearish, with a very strong resistance trendline that has now been hit six times in the last five years, though it has a history of multiple hits in short succession and we've only hit it once so far this time. I've added two internal trendlines to show that copper may have made a decent short term low, but if it gets back to 400 the obvious target is in the 360 area: 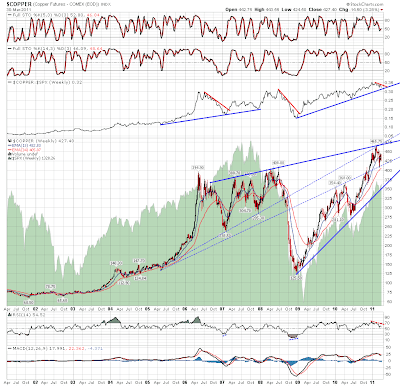 I've charted the second chart against SPX as there's a question in my mind as to whether equities might follow if copper breaks downwards. The evidence is ambiguous as though copper and SPX have tracked very well in the current bull market, the correlation was much weaker in the last one. Something to watch however.

The other instrument that I'd like to have a close look at is EURUSD, where a very important moment of truth is approaching. I mentioned this a few times but I'd like to underline quite how important this area is as it is the upper trendline of a huge falling wedge that would indicate to the 1.10 area if EURUSD fails to break up through it. The test will come in the 1.428 – 1.43 area, and the current rising wedge is not immediately encouraging for EURUSD. If EURUSD does top here, that doesn't have any immediate implications for equities as the last peak was in November 2009, some five months before equities topped in April 2010:

I don't know if anyone reading this trades the european stocks much, but I've seen something worth seeing if you do, and it is a simply beautiful broadening wedge on the Euro Stoxx 50. Nice clear upside target for this current wave up there: 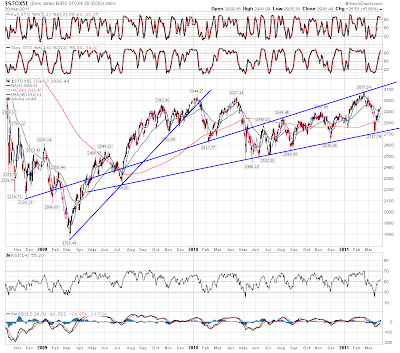 I won't post the charts for main US indices today but the Russell 2000 made a new high yesterday, and we're close to new highs on most indices. The overall uptrend looks strong and I'm leaning strongly bullish on equities here. There are some concerns about the uptrend, but that's why they describe bull markets as climbing a wall of worry.  If ES obeys the statistics then we could see a test of 1315 today and that would be a very nice long entry in my view. Any move below 1310 would break the current rising channel lower trendline, and a break with confidence of 1300 would be a strong signal to exit longs until the situation clarified.