ES bounced at 1300 support yesterday, and while it's definitely possible that a swing low has been made, the directional battle has not yet been decided, and this could definitely still go either way. On the bull side Mr Topstep has been watching the possible IHS on ES. This would definitely be a continuation rather than reversal IHS, and while you see a fair number of continuation IHSes form and play out, I can't remember many on ES / SPX in the past. Nonetheless it is a nice looking pattern. It's worth noting on this that the left shoulder bottomed at a support level at 1292, and classically the right shoulder target would be in the same area, though 1300 might well be close enough in practice. The upside target would be 1426:

On the bear side there is also an HS pattern forming with the neckline at 1300. The left shoulder's high was at 1315, which is a strong resistance level, and a move much over that would weaken this potential HS in my view. The downside target is 1263.5, though if ES fell that far, I'd expect a further move below the March lows:

Like ES, copper broke declining resistance yesterday, and like ES, copper is now back within a previous trading range at 421 to 431. A break above would look bullish and a break below would look very bearish. The downside break would be much more significant because copper is at a key support trendline. a move below 420 would indicate to the 360-70 area as I showed in yesterday's charts. I'll be watching this copper range for directional clues today:

EURUSD is looking interesting. I posted the chart yesterday showing that it was breaking below the broken wedge resistance turned support trendline, but it recovered later in the day and closed back above the trendline. That's the second strong pinocchio through the trendline in the last week and that's looking somewhat bearish. AUDUSD particularly is up against strong resistance and it may well be that we'll see a EURUSD reversal here. Either way I'm expecting EURUSD to break away from that trendline within a few days and the direction of that break should be significant:

The Russell 2000 made some upside progress yesterday, but is still well below the island top gap area, which it will need to get back above to start looking bullish again: 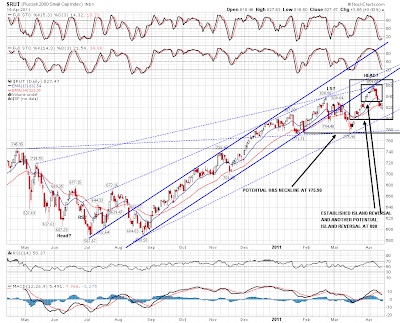 The potential NQ diamond top should ideally have a low hit next, but NQ is bouncing within a very strong support zone at the current levels. A move below that might coincide with a move on ES to test 1292 if we get that. As I mentioned above, a move to 1292 would still be consistent with the potential IHS on ES, though it would look distinctly bearish within the context of the shorter term possible HS pattern forming there:

Oil's looking interesting today. A nice looking broadening ascending wedge is forming, with a shorter term resistance trendline within it. The obvious short term next move for oil is to wedge support at 106, though there's strong support at 107.5 and that may hold. if it does then there's a real possibility of a move to the 115/6 area within the larger pattern. It that happens that would most likely coincide with a move down on equities.

It's opex Friday today, and we may just see directionless chop. We may well not break out of the current ranges until Monday or Tuesday.