It used to be that you could count on Monday to be a bullish day. No longer, as seven out of the last nine, and all of the last four Mondays have closed down on SPX. There's a good chance that today will be the same as SPX and NDX look overextended short term. Here the picture on the SPX 15min where some retracement looks likely, though it might be limited by the support trendline: 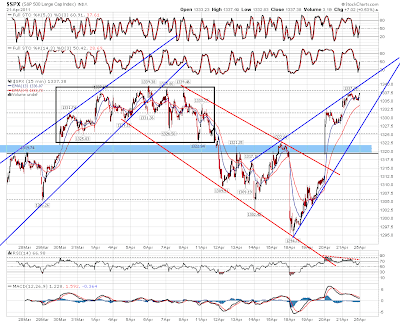 NDX is in a sort of channel, though with the two big gaps it's a strange looking chart: 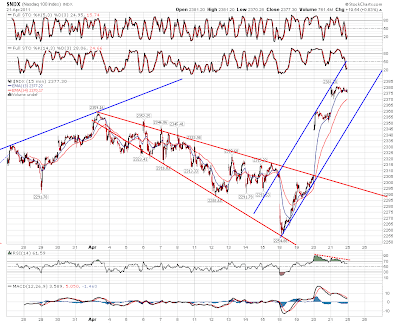 Copper's made a short term high on the 60min chart and is retracing. The obvious first target is at 432 though it might well go further. Copper's hard to call at the moment and I'm going to run some fib calculations today to see if copper might be in a bullish gartley pattern. if so we'll see more downside here:

Some mixed looking charts this morning. Vix has decisively broken support at 15 on the daily chart, and I'm expecting it to drop quite a bit further. That wouldn't necessarily mean that equities rise a lot, though it's bullish for sure: 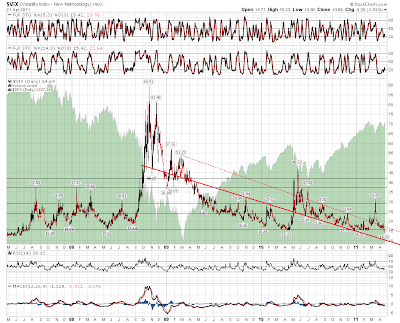 XLF is still stalled under declining resistance on the daily chart. If that were to break up it would look very bullish, but for the moment XLF is sitting on support: 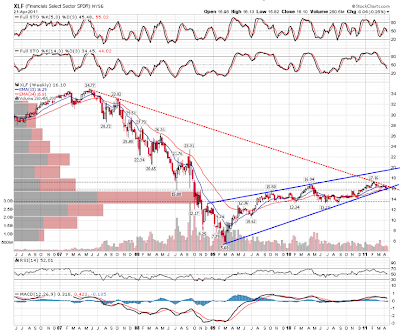 EURUSD is still hugging the broken rising wedge upper trendline as support. Some negative divergence is developing on RSI and if EURUSD can't break up soon that will start to look increasingly bearish:

The star of the show today is silver however, which took out the 1980 high at 49.45 overnight. Silver's now up almost 150% since it broke the 2008 highs in September and I'm sure everyone's wondering whether this is a blow-off top. If they aren't then they should be:

I'm leaning short on equities today. The stats are good for a gapfill on a gap up, Monday's have been bearish lately and ES looks as though it should retest broken resistance at 1319. We'll see.