If we are to see a rally here, which I'm leaning strongly towards, then the low yesterday was an excellent candidate for the short term low. On SPX the falling wedge overthrew before closing back within the wedge. I've tweaked the upper trendline of the falling wedge to improve the quality and resistance is now in the 1310 area. On a break up the target is 1343.89: 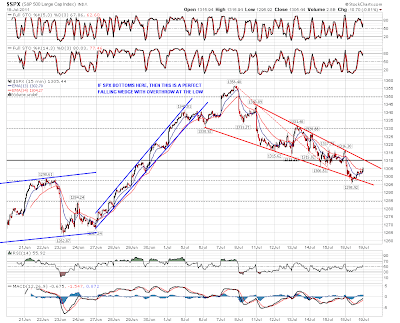 The lower trendline of the falling wedge on Dow broke down rather more convincingly and then again recovered the broken trendline by the close. The low established an alternate lower wedge trendline which I've marked up as the revised main support trendline. Wedge resistance is in the 12460 area and the target on a break up would be the July high at 12753.74: 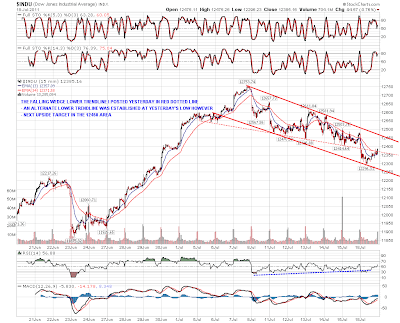 On RUT the declining channel I've been using performed perfectly yesterday, with a clean bounce off the lower trendline. The channel upper trendline is just under 830 and that is the next target, though I'm thinking that this channel may now break up: 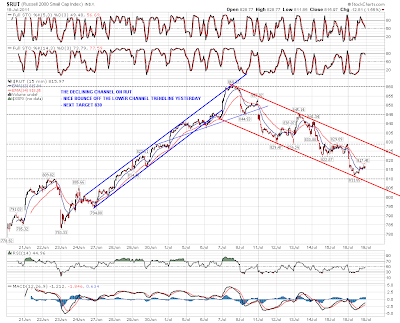 On NDX I have managed to find a declining channel, which now looks obvious and I'm wondering why I didn't see it before. NQ is at 2358 at the time of writing and has broken up from the futures equivalent of this declining channel. An open at this level would break up from this NDX channel as well: 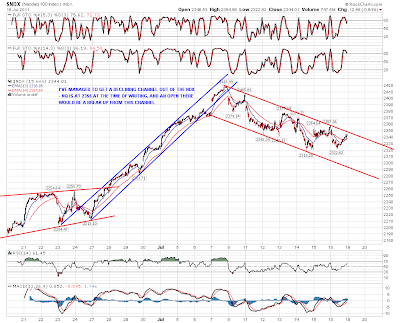 Silver has now made the IHS targets that I posted the other day as it was breaking up from the neckline. Looking at the 60min chart however, the move up has formed a rising wedge and there is definite negative divergence on the 60min RSI. Silver may reverse downwards today or tomorrow:

Gold has had a very strong run up to new highs here, but there is something strange about it in that the reversal didn't make it to main support at the daily 150 SMA. The 150 level was hit in January of course, but you can see from my daily chart that it was hit in February, April (near miss) and July 2010, and before that in January, April (near miss), July and August 2009. Gold is close to main rising resistance in the 1635 area and we may see a reversal there or beforehand to hit the 150 SMA again. If gold is going to break the three year resistance trendline then I have a shorter term rising channel that I'm watching in blue dotted lines: 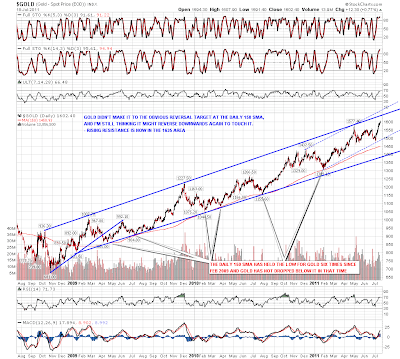 I said yesterday morning that I was watching for a break of the the declining channel on EURUSD to signal a rally and while I've since tweaked the channel into a broadening descending wedge, we saw that break up yesterday. The wedge target is the last high just under 1.43:

Copper has broken up to a new high overnight, and I have rising resistance at just over 450 and the next main resistance level at 455. Copper is now within striking distance of the year's high at just over 465, though I'm doubtful about this move up on copper making it that far:

Why am I looking for a rally here? There are a number of reasons. The falling wedges on SPX and Dow are pointing upwards. The action on equities over the last few days has shown decreasing downwards momentum, reflected in the formation of those wedges. NDX has been outperforming the other indices, which is generally bullish, and the futures charts have now broken up from their declining resistance trendlines, which is suggesting that we rally from here. How far will that go? Possibly to new highs but I'm not expecting a big new move up like the one we saw after last summer's correction. We'll see.