Most of my upside targets from earlier in the week have now been made, so what now? Well I note that having stalled at 1343 resistance for much of the afternoon yesterday, ES broke up through it after hours and has traded with it as support overnight. It may well go higher today though I think we may well be close to a short term reversal. Fortunately some decent support trendlines have formed on the indices on the way up so I'll be watching those for a break. Here's the not quite perfect rising channel on SPX: 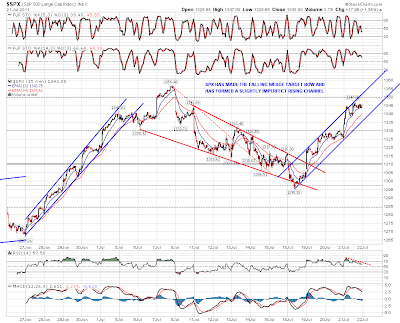 Dow has formed a gently narrowing rising wedge, though when a wedge looks this much like a rising channel, I tend to treat it as a rising channel and not a wedge. Dow is stalling at the July highs: 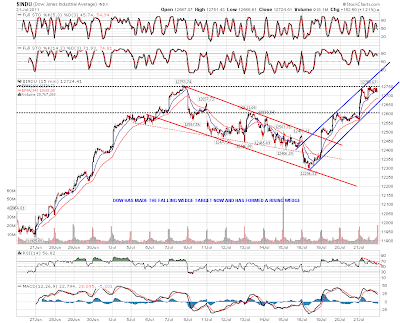 NDX has formed a broadening ascending wedge and like Dow, is stalling just under the July high: 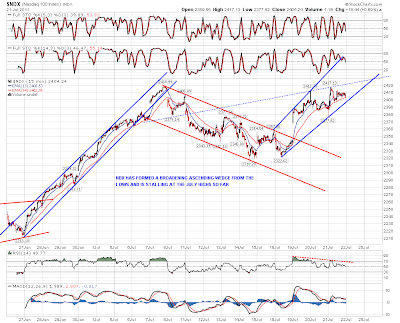 RUT has been by far the weakest of these four equity indices on the way up, which is a concern for anyone looking at the health and breadth of this move. It has also formed a rising channel on the move up and has not yet reached my target at 845. It is a long way short of the July high still: 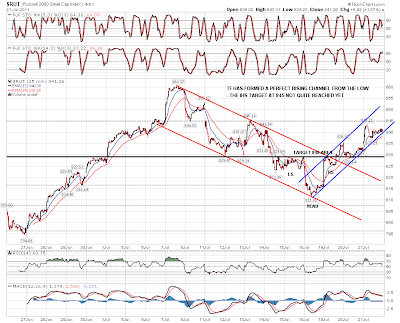 What do I think of this bull move? Well there are a lot of people that think that a big new bull wave up has started, and they could be right. I'll need some more evidence before I agree, but one big argument in the bears' favor was damaged yesterday, with the break down on USD. USD is still in the last stages of a huge bullish falling wedge, but the break down yesterday through the shorter term triangle at the end augurs badly for USD in the short term here, and opens the path to a significant move further down, and possibly even a new low. : 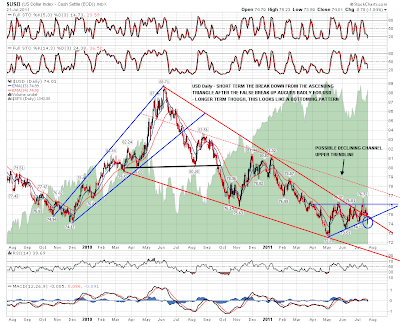 My friend strawberryblonde was saying yesterday that most stocks she was looking at were forming IHS-like or cup with handle-like formations, and the same is true of the indices of course. These aren't quite what we saw at the 2009  or 2010 lows though, the ones on NDX that Tim Knight posted yesterday and SPX which I'm posted below are continuation IHSes if anything, following earlier continuation IHSes that broke up and then failed. Will these fare better? Perhaps, but these aren't strong patterns: 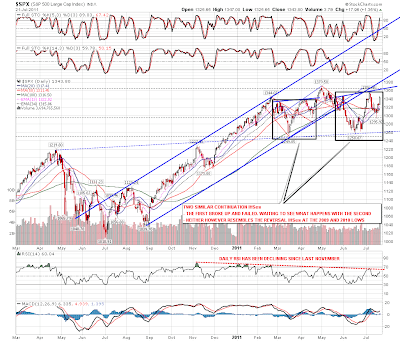 I posted the oil charts a couple of days ago and was suggesting that a triangle breakout looked imminent. It retraced just afterwards but has now broken triangle resistance. On a conviction break of 100 I'm looking for 105, possibly 108, and if those levels can be held, possibly higher:

I'm looking for a short term high to be made soon and am watching the support trendlines on the top four charts for a reversal signal. I have an open mind over what happens afterwards and will be watching the depth and speed of the subsequent retracement for an indication of how far this summer rally might go.