I am getting a sense of deja vu about this valley. The bubble has burst, but people haven't really accepted it, and there is still, in some quarters, a sense that things aren't just good, but better than ever.

Sentiments seem to be similarly ebullient in Silicon Alley these days: here's one of the latest local deals, a recipe curation site that just closed a $1.2 million seed round.

The table below shows the costs, as of Thursday's close, of hedging leading Internet stocks against greater-than-25% declines over the next several months, using optimal puts. I included the cost of hedging the PowerShares QQQ Trust ETF (QQQ) against the same decline as well, for comparison purposes. First, a reminder about what optimal puts means in this context, and a step by step example of finding optimal puts for QQQ.

Optimal puts are the ones that will give you the level of protection you want at the lowest possible cost. As University of Maine finance professor Dr. Robert Strong, CFA, has noted, picking the most economical puts can be a complicated task. With Portfolio Armor (available on the web and as an Apple iOS app), you just enter the symbol of the stock or ETF you're looking to hedge, the number of shares you own, and the maximum decline you're willing to risk (your threshold). Then the app uses an algorithm developed by a finance Ph.D to sort through and analyze all of the available puts for your position, scanning for the optimal ones.

A Step By Step Example

Here is a step by step example of finding the optimal puts for QQQ.

Step 1: Enter a ticker symbol. In this case, we're using QQQ, so we've entered it in the "Ticker Symbol" field below: 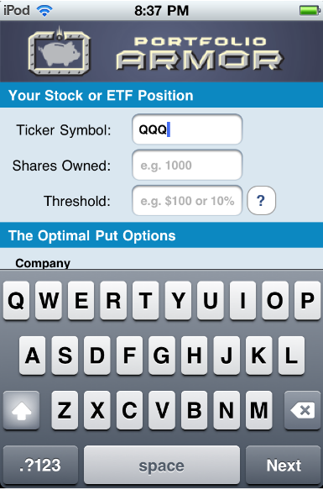 Step 2: Enter a number of shares. For simplicity's sake, we've entered 100 in the "shares owned" field below, but you could also enter an odd number, e.g., 731. In that case, Portfolio Armor would round down the number of shares of QQQ you entered to the nearest hundred (since one put option contract represents the right to sell one hundred shares of the underlying security), and then present you with seven of the put option contracts that would slightly over-hedge the 700 shares of QQQ they cover, so that the total value of the 731 shares of QQQ would be protected against a greater-than-20% decline. 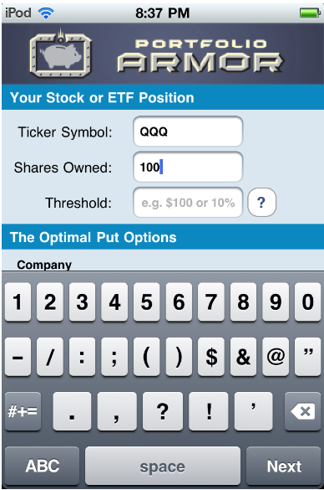 Step 3: Enter a decline threshold. You can enter any percentage you like for a threshold when using Portfolio Armor (the higher the percentage though, the greater the chance you will find optimal puts for your position). Most of the time, I use 20% thresholds when hedging, for reasons I've mentioned in previous posts, but since I've used 25% thresholds in my previous posts on hedging Internet stocks, I'm doing so here as well. So I've entered 25% in the Threshold field below. 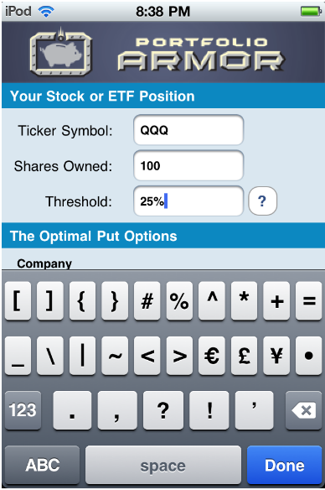 Step 4: Tap the "Done" button. A moment after tapping the blue button, you'd see the screen cap below, which shows the optimal put option contract to buy to hedge 100 shares of QQQ against a greater-than-25% drop between now and March 16, 2012. Two notes about these optimal put options and their cost: 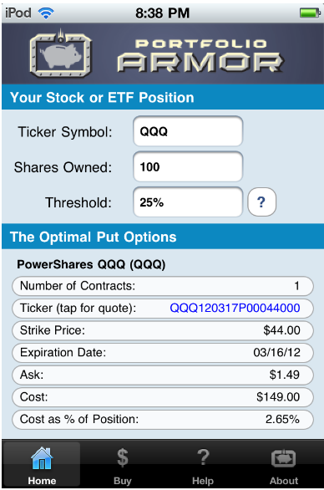 Why There Were No Optimal Puts for Pandora

In some cases, the cost of protection may be greater than the loss you are looking to hedge against. That was the case with Pandora Media, Inc. (P). On Thursday, the cost of protecting against a greater-than-25% decline in it over the next several months was itself greater than 25%. Because of that, Portfolio Armor indicated that no optimal contracts were found for it.

Hedging costs as of Thursday's close

*Based on optimal puts expiring in February, 2012

**Based on optimal puts expiring in March, 2012