Just a quick post today as it's halfterm now and I'm taking my children out every day and catching up on some admin until the end of next week.

We are consolidating here and after that is finished we will either push up further or drop. The boundaries on ES are clear enough. So well delineated are these boundaries in fact that I posted the chart below on twitter yesterday speculating whether a rectangle is forming on ES. If so then the next obvious move would be a test of Tuesday's lows and a strong bounce there to confirm the rectangle. The stats and targets are on the chart but that would be a bullish setup:

I'm happy to report that my rising channel on SPY bounced at the newly established rising channel lower trendline yesterday afternoon and then broke down through it. That's encouraging for a retest of the lows in the next couple of days: 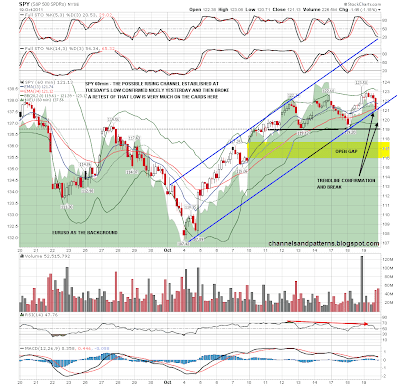 Vix bounced nicely yesterday and reached the significant 35 resistance area. A sharply sloping IHS may be forming there which could take Vix higher but it's possible that the bullish (equity bearish) scenario there that I've been looking at this week may have largely played out already without equities having fallen much while that happened: 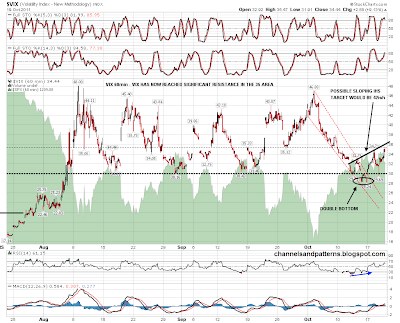 I looked more closely yesterday at the support trendline I thought had been established on EURUSD and realised that it didn't line up that well on closer inspection. At the low overnight however a perfect support trendline was established, and a break below that would now look bearish. Hard to call EURUSD here until we see a significant trendline break, which fits as we'll know more after the summit at the weekend to try to expand the EFSF bailout fund.

There may well be no increase in the size of the EFSF as the main backer of any such increase would have to be Germany, and this increase is potentially political suicide in Germany, with 80% of Germans against any bailout of Greece, and 75% distrusting the Euro itself. An article on Bloomberg summed up the German domestic situation nicely this morning and you can see that here. If there is no increased bailout fund then most likely the Euro will fall hard and take equities with it: 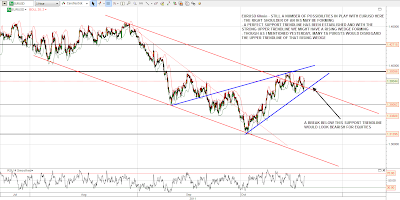 That would fit with a low on 30yr Treasury futures, where the rising channel established at the low is still holding: 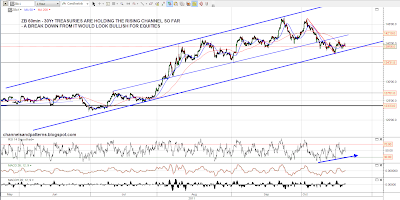 One thing I haven't talked about much recently is copper, and that's mainly because not much has been happening there. That however is in itself interesting and you can see why on the following chart where I have put the SPX in as the green background, and then superimposed EURUSD ($XEU), 30yr Treasury yields ($TYX) and copper ($COPPER) in red on the top over the last three years. You can see that SPX has been trending strongly with EURUSD and Treasury yields recently, but the best correlated of the three with SPX by a long way over the last three years has been Copper:

So what's been happening on copper since the low? Not much. while SPX was retracing well over half of the fall from the high, copper has barely managed to get past the 23.6% fib retracement level, and has since given up almost half of that on this real trading hours chart, and over half on the futures charts after further falls overnight. This is a big negative divergence on copper and it may be that copper will accelerate to the upside soon, but while this negative divergence persists copper is arguing for lower prices: 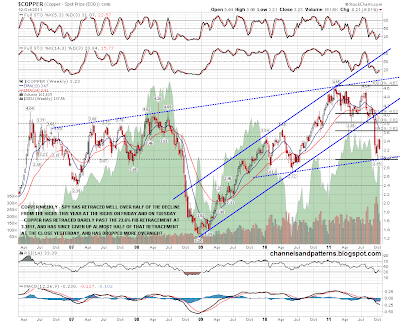 Tomorrow is opex Friday of course, and I'm not expecting to see a breakout from this range either way before the end of this week. The Euro summit at the weekend may well determine the direction of any break next week, and as I mentioned, if the German Chancellor Merkel is hoping to win the next election, there may well be no agreement this weekend, or indeed at any future summit, to bail out the PIIGS further. The Gap Guy says this in his free daily email about the prospects for a gap fill today 'Both up and down gaps on Thursday of Options Expiration week when below the 200 DMA have a high historical gap fill rate'.