There's been quite a bit of talk on the blogs about the possibility that this bear market might be finished now. Hard to say for sure but personally I think that's unlikely. Why is that? Well the analogs being touted around are mainly from the last secular bull market 1982-2000, which was the largest secular bull run in history and so  isn't an ideal guide. Times have changed now. Corporate profits have been strong for sure, but the economy itself is weak. To illustrate just how bad things are I'd like to show a chart from Money Game's Chart of the Day, which shows the percentage job losses after recessions since WW2. It makes sobering viewing. Click on the chart for see the full write-up: 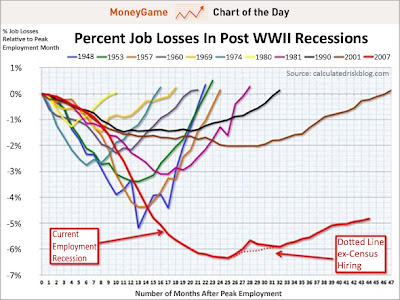 It's hard to be upbeat about economic and fiscal policy either. Quantitative easing and stimulus plans have been tried extensively in a big developed economy before, so we can at least see how they did there. That economic guinea pig was Japan and it's hard to see any long term positive effects these policies have had there. On the debit side Japan has been in (in effect) a 22 year depression and now has government debt equivalent to 200% of GDP, making it a prime candidate to default in the global sovereign debt crisis that is building. The last 22 years have not been kind to the stockmarket in Japan, with it currently trading at slightly over 22% of the level it reached at the top of the bubble in 1989/90: 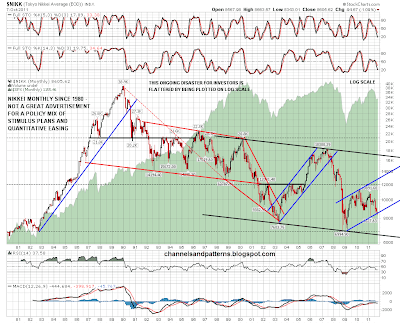 The failure of these policies in Japan is well known of course, and there are some Nobel Prize winning economists arguing that this failure was because Japan followed the right policies, but didn't follow them vigorously enough. You never know I suppose, but sometimes policies fail because they were simply the wrong policies, and having driven themselves to the brink of default following this strategy, it seems odd to suggest that Japan has not followed them with sufficient enthusiasm. Sometimes the best strategy when you have dug yourself into a large hole is to stop digging, rather than to dig with increased enthusiasm.

I've been looking at past bear markets over the weekend and the 1998 bear market analog looks at least superficially appealing, but there was no recession in 1998, and the chances are strong that recession is coming to the US soon, if it has not already started. Why do I think so? Well the Economic Cycle Research Institute warned clients in September 30th that recession is coming to the US. You can see that report here. The ECRI has forecast the last three recessions correctly with no false warnings in-between, as noted by The Economist. That's an impressive track record so the chances are that they're right about this one too, and with that being the case, the chances are therefore that this bear market isn't done yet.

So where does that leave this move up? It might last a while but it is most likely just corrective, and there are a lot of resistance levels above that will be tough to get through. However we had a bullish engulfing candlestick on the SPX last week and I haven't found a single instance of this in the last five years that wasn't followed by at least some more upside. If SPX can beat the last high at 1196.66 then this correction might have the strength to push up to test the strong resistance levels (very roughly) in the 1210, 1230 and 1250 areas over the next few weeks: 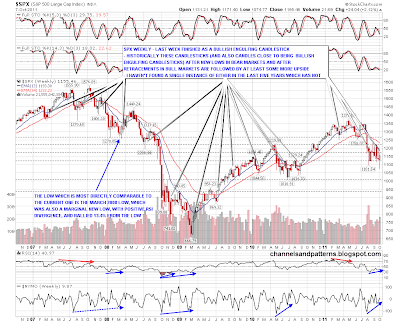 Short term on the daily chart SPX is finding resistance at the upper trendline of the rough declining channel I posted last week and I think we're close to a short term retracement here, if it hasn't already begun at Friday's high. The declining volume on this daily chart is also worth noting, as it looks corrective so far. Significant resistance may well be found at the daily 50 SMA, currently at 1177.87: 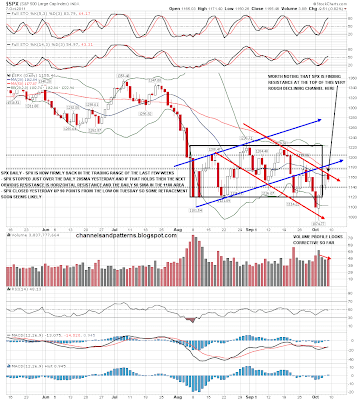 On the 15min charts there are now signs of weakness, and on SPX the rising channel I posted on Friday has broken down. I'm seeing the obvious retracement target in the 1334.5-40 area, though we might make a higher short term high first: 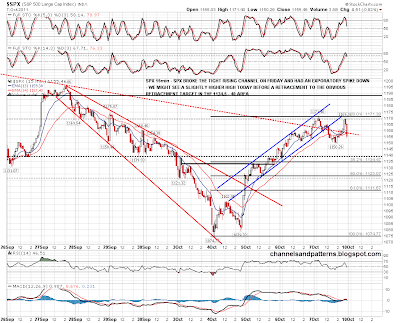 On the NDX 15min chart the broadening wedge I posted on Friday has broken down, and a slightly higher high has already been made. I'm seeing likely retracement support in the 2157-67 area: 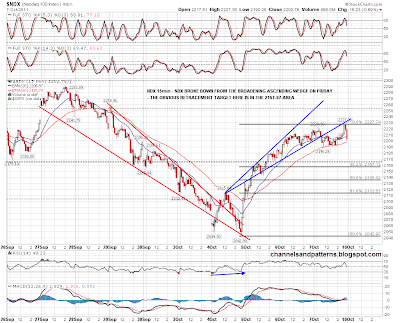 On the RUT 15min chart the rising wedge I posted on Friday has broken down, and I'm seeing likely retracement targets and support levels in the 645-50 and 634-6 areas: 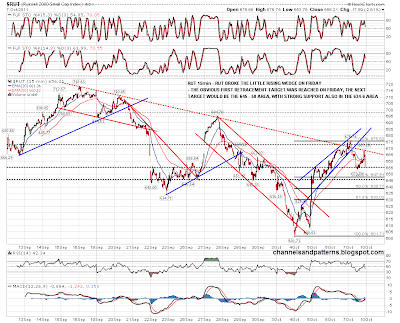 Overall I'm leaning towards seeing some early retracement this week followed by another push up to test the last high. I haven't posted an ES chart today, but I'm seeing strong support there in the 1133.50 and 1123.50 areas. Earnings season starts today and that might supply some surprises, as the still ongoing Euro area crisis might as well. The Gap Guy says that the odds for shorting up gaps look decent today and Mondays have leant statistiocally bearish lately.