Well that was a very wild recovery at the end of yesterday's strange trading day. I had a good day mainly as I took off my long hedges at 1075.25 in the morning and then put them back on at 1115.25 shortly before the close. Against that my late day scalp long at 1073.5 that I cashed for 1.25 points obviously left over 40 points on the table.

There was a lot of news yesterday.  Moody's three-level downgrade of Italy caused surprisingly little trouble. The announcement of possible plans to shore up Euro-area banks was credited with causing the late day moonshot.

Bernanke's Q&A session was very funny, with some particularly dimwitted questions and answers there. My favorite (good) question was the query whether the printing press was the Fed's only tool. My favorite (stupid) answer was Bernanke's remark that people need to learn to save more. In a situation where centrally planned and controlled interest rates effectively confiscate the entirety of savers' real interest returns as a huge subsidy to borrowers, the comment was rich with unintentional irony. You'd think that an Economics Professor might have picked up at some point that people respond to incentives, and that longstanding policies that have punished savers while rewarding borrowers would be likely to increase borrowing and reduce saving. It's hard to escape the idea that a gerbil as head of the Fed would do a better job than Greenspan and Bernanke have delivered since Greenspan was appointed by Reagan in 1987.

My ES 60min channel that I posted before the open proved to be prescient, with a perfect reversal at the lower trendline. Overnight a bull flag formed that has played out as high as 1124.75 on ES before reversing a few points lower at the time of writing. I've marked some strong resistance levels for today on the chart and I'm expecting to see at least a bit more upside today:

The NDX 15min falling wedge that I posted yesterday morning reversed very choppily and is playing out. Obvious overhead resistance is in the 2160 area: 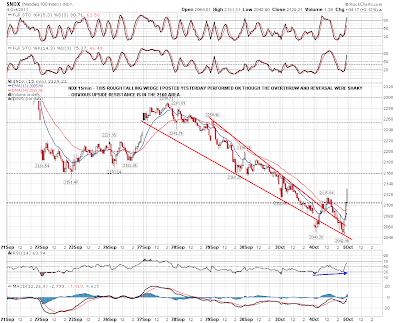 Of SPX, NDX and RUT the only bullish engulfing candle on the daily chart was on RUT. That seems likely to deliver some more upside, and I'm looking at the intersection of two important trendlines in the 670 area as a possible target and likely strong resistance: 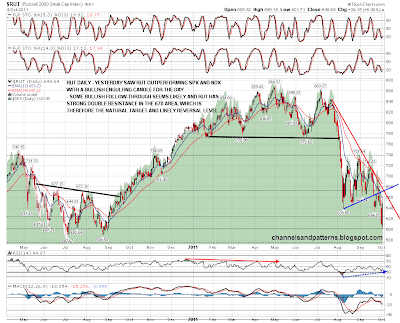 The Vix daily chart showed Vix closing back within the bollinger bands yesterday and many have noted that a lower close today would deliver a confirmed Vix Buy (equities) signal. These don't tend to be good performers in bear markets however and the last two signals triggered in recent weeks were both bull traps. I've marked those on the chart: 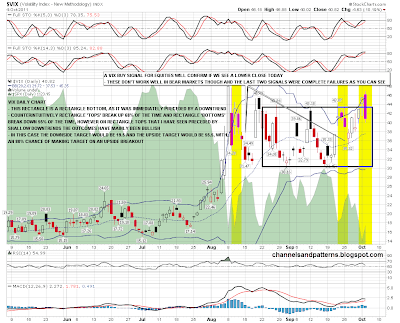 30yr treasury futures (ZB) are looking interesting. My little IHS target at 144'15 was made and exceeded with ZB running up to a lower high just over 146. The reversal there looks solid and the lower high suggests that ZB may have made a significant top. That's interesting here though bonds often top before equities so a significant top on ZB wouldn't preclude lower lows on equities:

I'm leaning strongly towards this being an oversold rally before new lows are made, though I know many analysts are seeing this as more than that. The move down looks incomplete however and I have a very good example of why that is on oil. I posted the oil futures (CL) chart yesterday giving my preferred target on CL as 65 from the 76.4 it was trading at when I capped the chart before the open. I don't tend to pay much attention to the oil ETF USO, but I was charting it last night on multiple timeframes for a project I'm working on, and noticed a perfect H&S on the 60min chart with the pattern target at 24.8. USO opened yesterday at 29.4 and if I apply the same fall I'm expecting on oil futures to USO I get a target on USO at 25, very close to the H&S target. If oil makes new lows and makes these targets then I'd expect to see new lows on equities too: 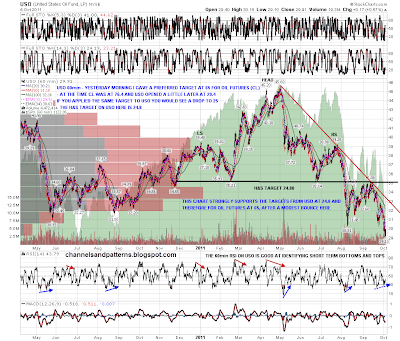 Overall I'm thinking we'll probably see a rise into a strong reversal on SPX. That might also fit with the bullish morning, bearish afternoon trading pattern we've been seeing on many trading days in recent weeks. The pivot on SPX is at 1107.95 and that will be a warning signal if SPX falls below it. Apart from the targets I've marked on the charts, the key ovehead resistance level to watch on SPX is the R1 pivot at 1141.12, and the Elliot Wave guys are watching the 1145 and 1150 areas for strong resistance as well.