Well what a wild year this has been. Huge moves but a finish within spitting distance of where SPX began the year. I was looking through my many index charts this morning and found the following chart of the Wilshire 5000 that I probably did in very late June and hadn't looked at since. You can see the arrows marking where I thought the index might go from there. Very spooky. I suspect I did the chart on the morning of 30th June as I posted a similar SPX chart that day which you can see here. This Wilshire chart also underlines the very strong resistance at the level being tested now there and on SPX at the very important 200 day SMA: 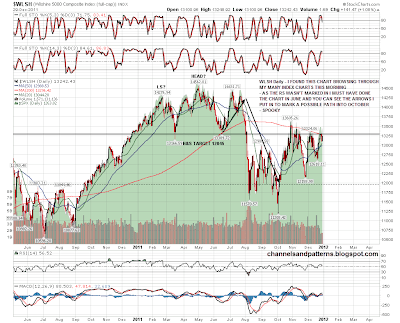 It used to be a rarity to have two trend days in opposite directions back to back, but I think the last three trend down days have now all been followed by trend up days. The strong bounce that I was suggesting for EURUSD obviously played out, with a 100+ pip move up from the low. That isn't bullish on the bigger picture yet, though it's possible that EURUSD has now put in a double bottom on positive RSI divergence on the daily chart. If we see an hourly close over declining resistance then I'd move that up to probable. Everything marked on the chart with targets: 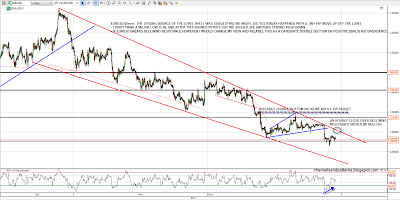 On the ES chart we now have a very nice looking IHS almost formed on the 60min chart. The target would be in the 1330 area if this was a reversal IHS, but obviously it isn't, and the target could not be relied upon. I have seen these play out in the past though and a break up over the neckline would look bullish regardless:

SPX was rising with bonds yesterday, and Vix has also had a strong week. These are significant divergences and can't last. Either bonds or equities are going to break downwards shortly and I'm expecting it to be equities. Either way we're unlikely to stay at this level long. Here's the Vix chart where the obvious retracement target at the middle bollinger band or 20 day SMA has not yet been hit: 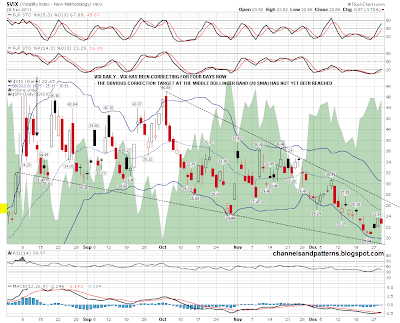 I've a selection of other charts for you today. The first is the weekly Ichimoku Clouds chart on SPX, which shows the next big resistance and target if we do see a break up here in the 1300 area. A break over the cloud with any confidence would be a strong indication that we are looking at a new bull market, though for various reasons I still think that's unlikely: 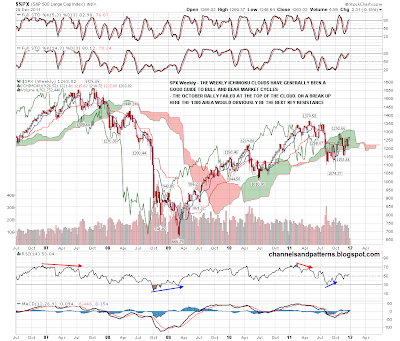 Next up is the FTSE daily chart, showing the big resistance here. FTSE will follow SPX here but the obvious next move is down. I haven't shown it on a chart today but the SPX 200 day SMA is still big resistance here and you can also see on the Wilshire 5000 chart at the top that we're up against it there as well: 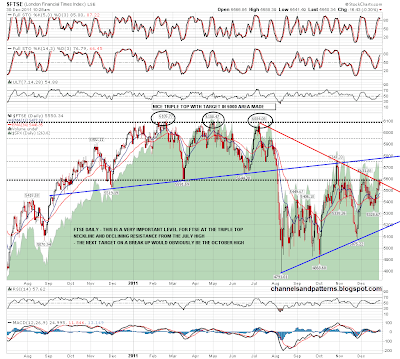 I was looking at the Shanghai Composite chart this morning and that's in a sorry state. Shanghai never exceeded the high made when it double from the late 2008 low into the end of the 'dash for trash' rally in July 2009. Rising support from that low (and arguably the lower trendline of a triangle with an improbably low target marked on the chart) broke in the summer with a retracement kiss goodbye. A declining channel then formed which is breaking downwards. It seems most unlikely that China stocks will support any big move up on equities here and I read that the outlook in India is even worse: 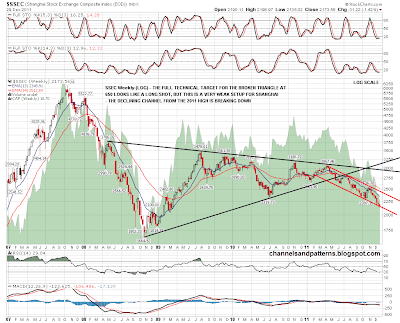 Last chart of the day is GDX, where the lower trendline of the broadening top was hit yesterday with a strong bounce so far. The positive divergence on the daily RSI looks supportive of at least a decent bounce: 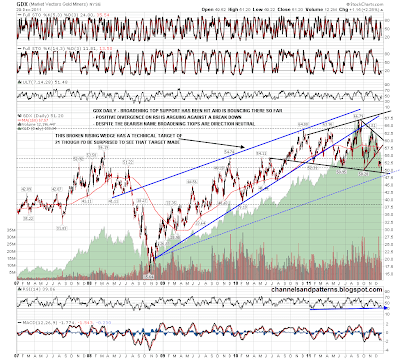 On the last trading day of the year SPX has closed down nine of the last 11 years, and after trend up days following trend down days, 70% have closed down. Both stats from Cobra who has now moved to being a subscription site. We're just under major resistance and unless we see a new high on SPX over 1269, Pug, Alphahorn, Alex Grant's ES Forecast and myself are ALL leaning bearish for next week. If we break the lows this week on a move down next week, I would now have a new double top target in the 1220-3 ES area and if that area were to break we could go a lot lower. I'm thinking that a gap fill today looks likely and a major resistance break today looks unlikely.

I'll be out most of the trading day today with my younger son. Everyone have a fun holiday weekend and a great New Year in 2012.