It was looking pretty good for a decent retracement yesterday. Even after the bounce at support the setup was looking very nice, and I posted this H&S forming on the SPX 15min chart on twitter in the early afternoon: 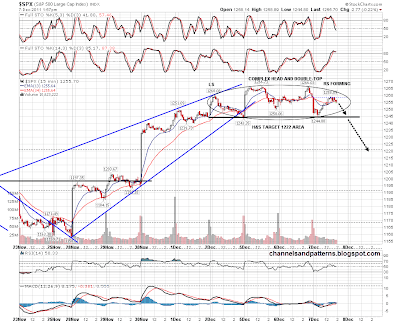 Obviously the H&S didn't finish forming, so how does it look this morning? Well on SPY I'm inclined to interpret this consolidation as a 70% bullish rectangle. Support is at 125 and resistance is at 127.2. Targets on a break are 122.8 downside and 129.4 upside, which would fill the open gap above the rectangle: 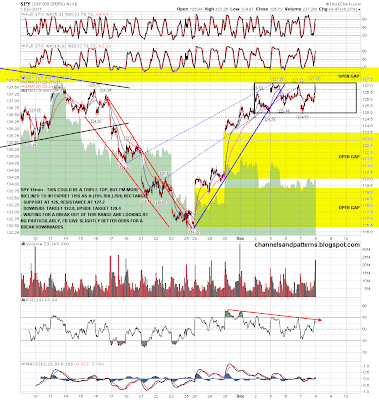 There is a greater than usual chance that this will break down in my view however, looking at the broken ascending triangle on the NQ 60min chart. We'll see how that goes but I have the triangle target at 2265 with a 68% chance of reaching it:

I posted the nice looking reversal setup on Vix, and it isn't great news for bears that Vix has been inching up while SPX has traded sideways. I'm expecting the open gap to be closed on Vix even if we do break up, so that argues for at least a little more downside action on SPX today even if this equities consolidation then resolves upwards: 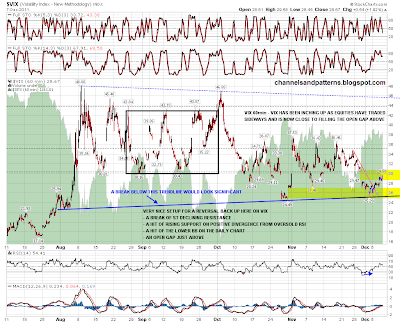 Last chart of the day is the nice looking triangle that has formed on gold futures over the last few months. Worth noting on this chart is the daily 150 SMA, running just below triangle support. The last daily close below this MA on gold was in July 2009, so a break down would look very significant if we saw a daily close below both triangle support and the 150 SMA. Until we see that however I'm leaning bullish on this triangle and we might well see gold make another run at the highs if the triangle should break up 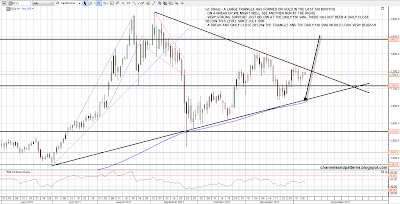 As we seem likely to open near resistance I'm leaning bearish initially today. If we see ES trade above the rally high at 1268 that should be a break upwards.

https://slopeofhope.com/2011/12/waiting-for-a-break-by-springheel-jack-3.html
Waiting for a Break (by Springheel Jack)