Obviously the pre-market high yesterday at 1280 ES held all day. ES and EURUSD were both looking short term overbought, and the hourly RSIs have now reset somewhat. I'm still wondering this morning about a possible retest of broken resistance at 1265 ES which I mentioned yesterday morning as a possibility. Much lower and I'd be wondering if we've seen a short term top yesterday morning:

On the daily chart SPX touched the upper bollinger band and pulled back. I was concerned to see a lower low on NYMO yesterday that could be a sign that we've made a short term high on equities. SPX needs to make new highs with NYMO to negate that bearish signal: 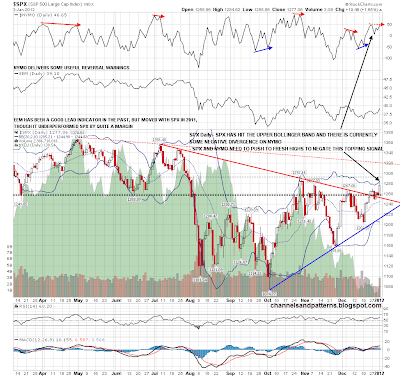 We saw a lot of resistance trendlines break on equities yesterday. On SPX, with declining resistance and the 200 DMA broken, the next resistance level is at the October highs, which need to be broken soon and with confidence. There's a similar though stronger setup on the FTSE daily chart which shows the immediate situation well. A failure here might result in a very sharp reversal: 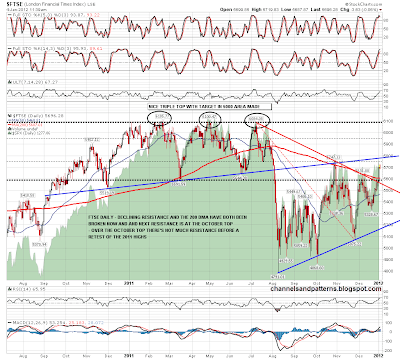 On the TRAN chart the ascending triangle has broken up and TRAN was retesting broken resistance yesterday. On TRAN as with the Dow, the October highs have already been taken out. Dow and TRAN are the lead indexes at the moment, which isn't a healthy situation for bulls here: 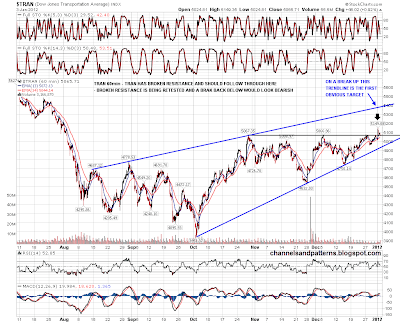 On EURUSD the declining trendline that broke up yesterday is being retested as I write this in the 1.295 area. A break back below would suggest a retest of the lows: 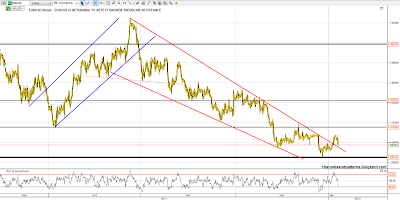 I was saying yesterday morning that rising support in the 80 area needed to break on DX to confirm the low on EURUSD. That hasn't happened yet, though both have been tested hard. After another look at DX I've redrawn the rising channel as a rising wedge and the candidate double-top neckline and target is marked on the chart: 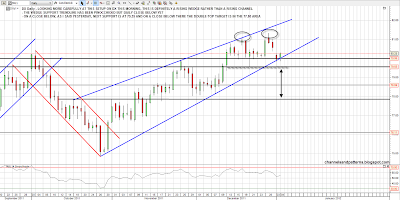 I'm in two minds here about where equities are headed. There were some big resistance breaks yesterday and that has me leaning long as long as the 1265 ES area holds. SPX needs to take out the October highs shortly however, and with confidence to avoid a double-top here. A break up on EURUSD would help equities a lot but we'll need to see support break on DX to confirm a low on EURUSD. I'm more cautious than usual here because at the moment I don't have any decent short term support trendlines on equities.