We've been having a lot of days where the low has been made about 10.30 and equities then rose for the rest of the day. Yesterday broke that with a bounce that petered out and then drifted downwards until the close. That doesn't mean that we've seen a top, but it is a change in the character of the market. On ES we have broken down from last week's rising channel into a shallower one. A break below channel support in the 1280 area would look immediately bearish. Channel resistance is in the 1308 area:

On NDX the rough channel I posted yesterday on NQ is mirrored almost exactly. A break below channel support would look bearish: 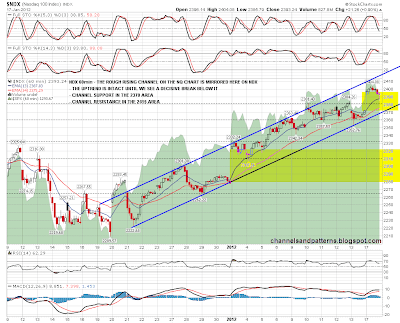 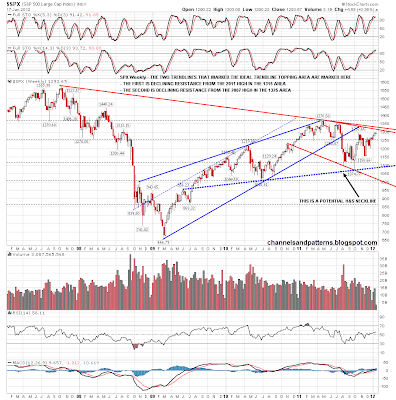 It's been a while since I posted the EEM chart but that's obviously one of the instruments that should be leading if this were to be a new bull market, and it's lagging badly. The upward sloping H&S that may be forming on SPX is mirrored by a downward sloping equivalent there: 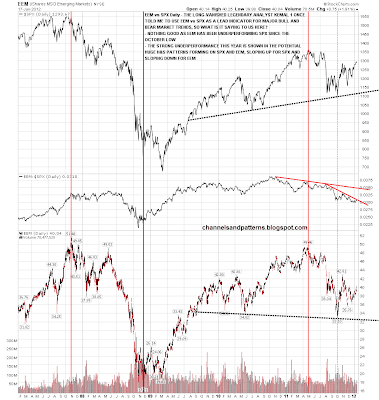 The dead cat in the post title is EURUSD, which has fallen far and seems likely to fall further. However there are signs that EURUSD might be making a low here. Declining resistance from the last big high has been broken, though that was a weak trendline and may well not be significant. What is more impressive is the positive divergence on the daily RSI, and EURUSD's failure so far to break the August 2010 low. The last short term high was just above 1.287 and that is a potential IHS neckline so I'll be watching to see whether EURUSD can make it that high. The effect of a significant swing low on EURUSD is hard to call here but it might well help equities rise so I'll be having a closer look at the intraday relationship between EURUSD and SPX over the next couple of days: 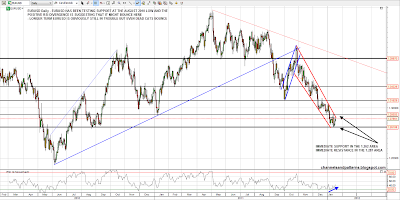 30yr Treasuries are stalled at the late December high in the 145'08 area and have not yet made the falling wedge target in the 146'10 area. I'm leaning towards a break upwards to make that target but it might go the other way:

I mentioned the other day that CL might form a large H&S at the 98.50 support level and it overshot somewhat. On an hourly close basis though, a horizontal neckline at 98.3 is still in play and if so, then we are nearing the likely top of the right shoulder. Ideally that would be at the intersection of declining resistance and broken rising support in the 102.10 area and that would seem a very attractive short entry. Oil is obviously subject to big geopolitical swings, but I listed four bear patterns on it last Friday and this potentially is a fifth. A move down seems much more likely than a move up from here:

I'm leaning slightly towards the long side today but without any real conviction. I'll leave you with a couple of links from free blogs which I check every morning and would recommend. The first is Serge Farra's ETF Corner where he has posted an interesting SPY chart with a predicted high near my SPX target at 1315. You can see that here. The second is Trading The Odds, where the author has posted an excellent statistical review of the week following Martin Luther King day since the holiday was started in 1998. Of fourteen of these to date, ten have closed the week down, and the only rise of the four green weeks that beat 1% closed up only 1.54%, which is worth bearing in mind. You can see that post here.