We've reached a potential topping area on SPX for both the current move up and potentially for the wave C top if this move from the October lows has in fact been a bear market rally. If SPX was to top here or close to here then that would deliver a double top from the October low, with the November low as the pattern neckline, and if SPX peaked yesterday that would deliver a target range for the next move down in the 1020-5 area. If SPX goes a few points higher that target would drop a few points as well. Here's how that looks on the SPX daily chart: 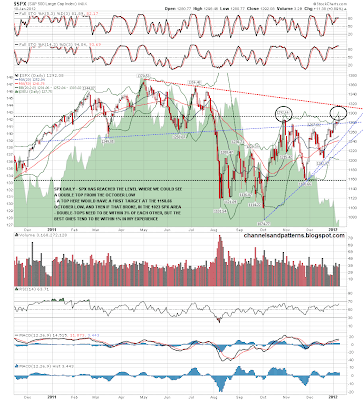 We don't have a support trendline from the last low on SPX or ES, but we do have the next best thing, which is a rising channel from the IHS right shoulder low a bit higher than that. A break below channel support on ES should deliver the signal that the topping process has begun, and I have that support at 1277.50 currently:

SPX also has a decent support trendline from the same low and rising support there is now at 1282, effectively the same level as on ES: 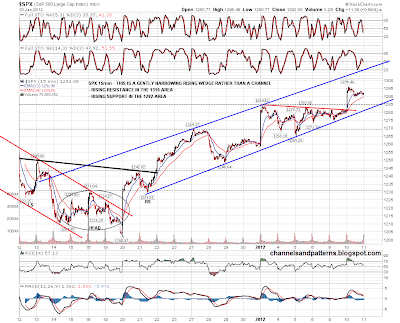 I mentioned yesterday morning that NQ might find decent resistance at last week's rising wedge upper trendline and it did. I've had a closer look at that and reinterpreted it as the upper trendline of a slightly rough rising channel:

30yr Treasuries didn't make my upside target last week but that target is still in play. A move towards it would most likely involve a move down on equities so that's worth bearing in mind:

Last chart of the day is on german bund futures. I posted a chart of these a few weeks ago suggesting that the obvious next move was up towards resistance in the 139 – 139.5 area. That has been hit and delivered a nice looking short setup from a top that works both as a triple top and as a part-completed H&S. The next obvious move is down towards neckline support for both at 133, and if that breaks the pattern target for both would be in the 126.5 area. German bunds have evolved since April from being a risk-off asset inversely correlated with equities to being a risk-on asset directly correlated with equities so a moved down here would probably imply a move down on equities as well. Regardless of that this is a nice looking short setup: 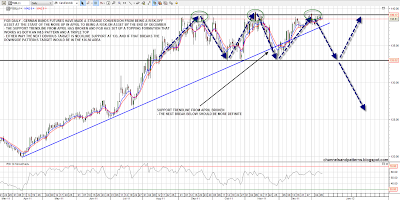 I'm watching the support trendlines on SPX and ES here. In the event that these break then that would be a strong signal that the topping process has begun, and that the swing high may already have been made.

As an aside I've been reading a lot in recent months of how it would be extremely hard for the Euro to break up because any weak countries leaving the Euro, with their sovereign debt obviously priced in Euros, would be forced into default by the depreciation of their new currencies against the Euro. That's fair enough, but it's strange that I haven't read anywhere the obvious solution inherent in this problem, which is that the solvent countries in the Euro zone could leave the Euro instead.

That would leave the Euro to depreciate rapidly as increasingly the currency for the embattled PIIGS, and that when only poor quality members remained in the Euro, the remainder could then exit the Euro at a reduced exchange rate, avoiding the risk of being forced into default by depreciation against what would be then be a high risk currency sold down to low levels. An easy dissolution for a common currency that was fatally flawed from the beginning. Why has no-one suggested this? Thought for the day.