I did mention yesterday morning that Wednesday's trendline break didn't preclude a new high and obviously I was glad I did, even if that seemed a bit wishy-washy. I've watched that film before, though I was surprised to see a new high made so fast yesterday. That leaves us pretty much where we were on Wednesday morning, with the trendline break in the meantime as a significant sign of weakness. Trendline resistance is now in the 1365 SPX area: 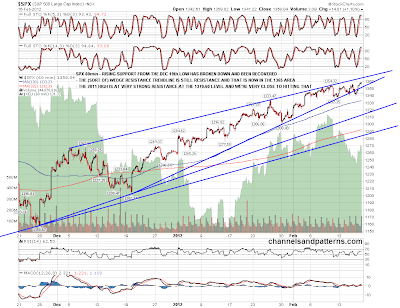 There's a similar setup on the ES chart with trendline resistance there in the 1362 area. There's also an interesting looking broadening formation, right-angled and ascending, that has formed over the last few days. These patterns break down 66% of the time:

I was looking at the NQ chart as well, just to marvel at the almost 400 point run there since the Dec 19th low. In the past NQ has always struggled at the 200 point markers, and it took a year and several runs at it to clear 2400 with confidence. One significant reversal from 2600 so far:

There was a very impressive spike up on EURUSD yesterday and it may be that it is going to make a run at my original target area at 1.35-6. However the lower low it made yesterday morning was also impressive, and EURUSD is going to have to make a higher high, and break declining resistance from the high, before it starts to look bullish again. I have that declining resistance in the 1.32 area:

I've saved the most interesting chart for last. I mentioned yesterday that a close back within the Vix bollinger bands would look bullish for equities and we saw that. That has triggered a Vix buy (equities) signal and Vix needs to close down again today to confirm that. The more interesting thing however was that the daily candlestick on the Vix yesterday was a bearish engulfing candlestick. That also needs a lower close today for confirmation.

Vix buy and sell signals are very hit and miss, and you can see from the last three signals marked on the chart below that only one of them actually delivered the goods. I'd be inclined to ignore a signal like this so far into an uptrend. The bearish engulfing candlestick is a more serious matter altogether. If Vix confirms with a lower close today then I would expect more downside for a few days at least, and it's worth noting that another retest of broken falling wedge resistance in that timescale might involve a retest of the recent Vix lows: 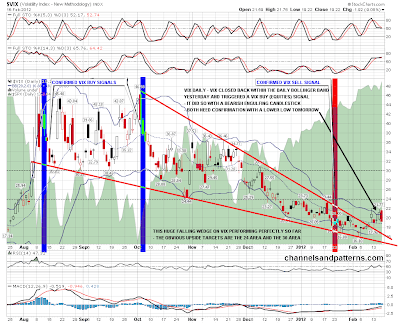 Overall I have mixed feelings here. We are still just under strong resistance on both ES and NQ. Copper and EURUSD both made significant lower lows yesterday, and while they've both bounced strongly from those, the overall setup on both still looks bearish.

Much depends on the Vix today. If it closes down and confirms the signal and engulfing candlestick, that will be a serious warning that we could see SPX and NQ gap over resistance just above and I'd take that double signal seriously.

The stats for today are bearish however, and the day after a trend day also generally sees some retracement or a sideways move. It may well be that Vix closes up and fails to confirm this bearish engulfing candlestick just as the similar candlesticks on SPY and AAPL on Wednesday were negated yesterday.

I'm expecting to see some retracement today and am looking for support at the broken and recovered rising support trendline in the 1350 SPX area. If that is broken with confidence then it's worth mentioning that there is currently a double-top setup on ES indicating to the 1310 area on a conviction break of 1334. I'm not expecting to see that play out though, and my WAG for the next few days is that we see some modest retracement today, followed by a test of the 2011 high on SPX on Tuesday or Wednesday of next week. Most likely we should see a more significant retracement from that area. If we see SPX gap up over that resistance and run, then a string of higher upside targets will open up, and the chances of that happening will be much higher if the Vix closes down today.