I was saying on Friday morning that a lower close on Vix that day would confirm a Vix Buy (equities) Signal, and also a bearish engulfing candlestick on the Vix daily chart. Vix confirmed both on Friday and that very much needs to be borne in mind as a strong warning signal here for equity bears. The situation is more complex than that of course, with the bullish (for Vix) falling wedge giving strong support at the broken upper trendline in the 16 area, but obviously we might well see another retest of that broken wedge resistance in the near future 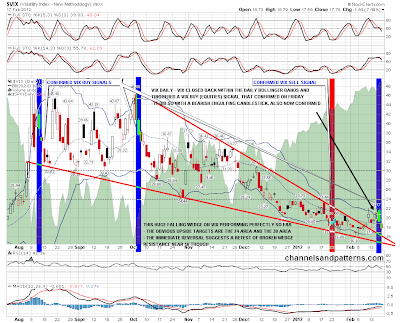 The ES chart is giving some support to the bullish scenario, as my resistance trendline from early December was broken at the globex open on Sunday. I'll be watching the SPX equivalent to see if that is confirmed during real trading hours. If it is then I'll be writing off the bearish rising wedge type pattern from the Dec 19th low, as although rising wedges often overthrow before resolving downwards, a break of wedge support before that overthrow suggests that the pattern may well resolve up instead. If we do see the resistance trendline on SPX broken then I'll be watching strong resistance at the 2011 high, and if that is broken, I have a rising channel marked in green on the chart below with resistance in the 1383 area today:

On NQ the rising channel I posted the other day is still holding firm, though resistance at 2600 is also holding firm. Obviously one or the other will need to break in the next two or three days so we'll see. NQ traditionally finds resistance at the 200 point markers of course and took several attempts before taking 2400 and holding it:

Obviously EURUSD is pivotal at the moment, and an agreement for Greece to default in an orderly manner was agreed yesterday. Despite the effective 75% writeoff for private sector bondholders the terms are still so harsh that even on the rosy growth assumptions I understand that the greek debt to GDP ratio will still be at 170% in 2015 and 120% in 2020. Realistically this dog won't hunt for long, but the crisis has been expensively deferred for the moment at least. Over the weekend EURUSD broke the declining resistance trendline from the highs and an IHS has formed that I have marked on the chart below. The target is in the 1.339 area which fits with my rising resistance trendline on the chart. If we see a break below the IHS neckline in the 1.318 area then this will look less bullish, but for the moment I would assume that we should see a hit of resistance near 1.34 within a few days:

A couple of other interesting charts to end the day with are the oil and gold charts. When oil broke declining resistance from the high a few days ago I suggested that might see a test of the highs.We've now seen that test, then a new high, and then a gap over rising resistance just under 105. For the moment that broken resistance is support and more upside seems likely whether or not we see some retracement here:

Gold is also looking interesting here. The rising channel from the low broke down a few days ago, and that was obviously bearish, but support at 1700 held well, and a larger rising channel (marked in green) has now been established. Declining resistance from the high has been broken and I'm expecting more upside with a possible target in the 1850 area at the upper trendline of the green rising channel:

The odds for a gap fill on SPX today look decent, and if we then see a break of rising wedge resistance in the 1367 SPX area I'll be watching strong resistance at the May 2011 high at 1370.58.