Yesterday's bearish engulfing candlestick was on SPY daily chart was a refreshing change of pace. SPY gives a much more accurate picture of opening and closing positions than SPX due to data feed issues at Stockcharts and most other places. No idea why that should be but I've corresponded with Stockcharts about it and they tell me there's nothing they can do to correct this.

As we saw with (cough) AAPL the other week, a bearish engulfing candlestick needs to be confirmed with a lower close the next day. The stats for this aren't encouraging from recent history. This is the sixth bearish engulfing candlestick on SPY in the last 18 month, and not one of the last five confirmed with a lower close the next day. Of those five only one (November 2010) was at the start of a significant retracement. These stats are from an excellent chart posted by my friend Cobra at his subscriber site.

Nonetheless there was a lot of technical damage done yesterday, and I'm working on the assumption that we will finally see some retracement on SPX over the next few days unless we see a new high made. The Gap Guy likes the odds for the gap fill today.

If this is the start of a retracement then my preferred target would be a 38.2% fib retracement of the move since Dec 19th, which will intersect with the rising support trendline from the October low on SPX in a week or so in the 1311 area: 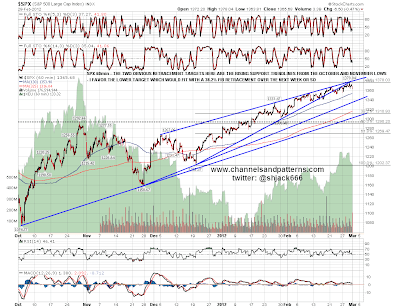 The H&S on the Transports index is still in play and that would target the 4900 area: 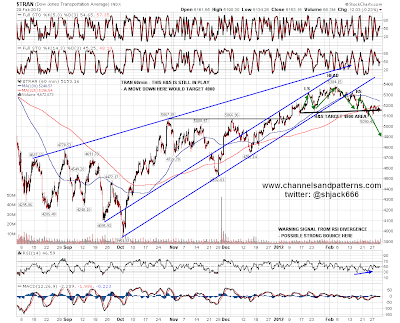 I did mention that gold was looking short term toppy yesterday morning but was surprised when the move down took both gold and silver through obvious and strong support. I'm leaning towards more downside on gold and the obvious target would be strong double support in the 1600 area: 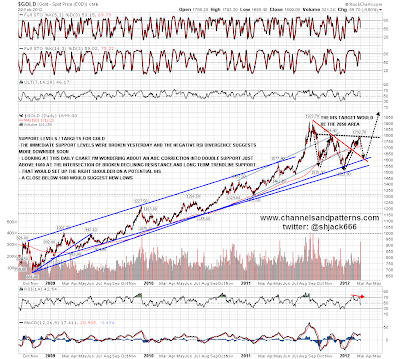 The little double-top I mentioned on EURUSD as a possibility yesterday morning is playing out towards the 1.3245 target. I have trendline support from the low in the 1.315 area and I think that's the obvious overall target. Short term there is some positive divergence on the 60min RSI suggesting a bounce or the formation of a bear flag:

Vix is looking bearish (for equities) to my eye here. The big falling wedge is still in play of course but in the short term a little IHS is forming with a target in the 22 area if it completes and breaks up: 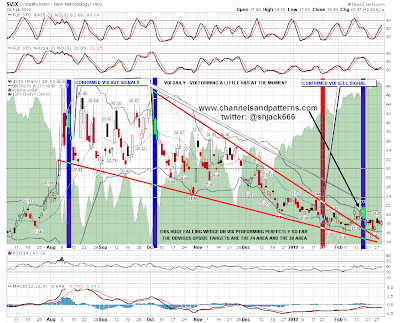 I mentioned yesterday morning that the short term uptrend on ZB was breaking down and we've seen a sharp drop since then. The obvious support and target is in the 139'15 to 140 area:

As with gold there was a sharp move down on oil futures yesterday. Unlike gold, the low was at obvious support and unless we see a break lower there's no immediate technical damage to the uptrend on CL to my eye:

Just to recap on the prospects for today, the odds for a gap fill are good, and while I'd very much like to see a lower close, the stats are suggesting that a higher close than yesterday's on SPX is more likely. We have been seeing a very strong pattern in recent weeks of a counter-trend move in the first hour followed by a move in the direction of the trend for the remainder of the day. Mostly this has involved early lows followed by a push to new highs. Yesterday was the reverse of that and the direction of the move in the first hour may therefore signal that the remainder of the day will go the other way.