SPX ended Thursday's session perfectly poised to go either way. On the 60min chart support from the Dec 19th low was being tested, but was holding at the close: 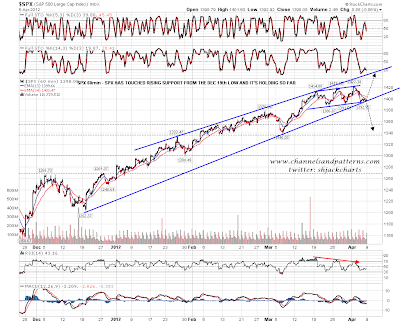 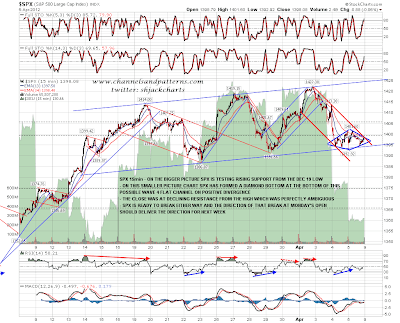 No technical damage had yet been done on SPX, though support from Dec 19th had already been broken and retested on ES as I showed on Thursday morning. On Friday the reaction to the poor employment figures was very decisive further break down on ES to the first major support level in the 1371.5 area. This may well hold short term and I'm looking for a bounce here. If that level breaks this morning then the next major level down is the possible H&S neckline in the 1332.50 area: 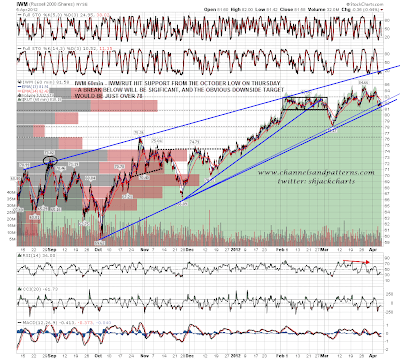 NDX recovered better than the others on Thursday (AAPL & GOOG) but unless we see a strong recovery into the open then I'm expecting to see a break of rising support from Dec 19th at the open there too: 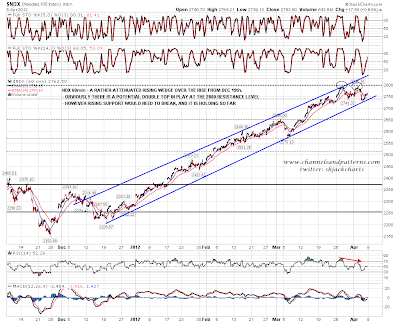 These support breaks also throw the H&S formed on EURUSD into sharp relief. It's been my view all year that EURUSD was likely to have a very bad year after the rally from January ended, and if we see the H&S neckline break with confidence during a move down on equities, then both may well drop hard as they will be reinforcing each other. Short term however EURUSD looks like it is forming a little double-bottom and may bounce with equities early this week:

Bonds finally made and slightly exceeded my retest of broken support target just over 140 on Friday and stopped at some trendline resistance. I have a slightly higher declining resistance target in the 141 area that might now be hit. Any higher than that and I'll be writing off the larger bear scenario on bonds for the moment. As I commented last week, the likelihood that treasuries could drop much during a pullback on equities is low, and on a break over 141 bonds would be looking higher. Short term we may well see some retracement here:

Assuming we see breaks down at the open on SPX, NDX and IWM/RUT, then the technical damage to the uptrend here is extensive, and the one-way market of the last few months is broken for the moment. Short term I'm looking at 1371.5 support on ES to hold today, and if it does, then the odds for a bounce early this week look good. The odds of further downside after that look strong. Have we seen the seasonal interim top before the usual summer weakness? Possibly, though I'm still leaning towards seeing some more upside after the current retracement. We'll see how this develops.

Today is a holiday in the UK so I won't be around much for the remainder of the day, and I'm hoping to take my daughter to see The Hunger Games today, in which case I'll be out for much of the trading session.