On Tuesday, Toronto's TSX Index closed below major support and below December 2011 lows, as shown on the Daily chart below. The RSI, MACD, and Stochastics indicators are still trending down. The 50 sma has now crossed below the 200 sma and we now have a bearish "Death Cross" formation on this index. 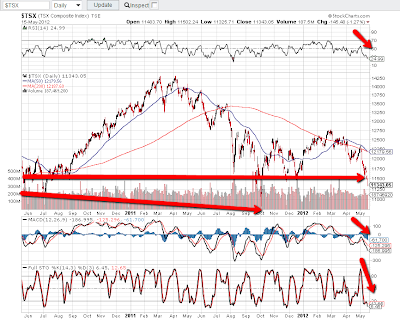 Inasmuch as the TSX Index is weighted in favour of commodities, I'm also discussing the two Daily charts below of the Commodities ETF (DBC) and the AUD/USD forex pair, which show their continued decline below major support. Price is trading close to December 2011 lows, and the MACD and Stochastics indicators are still trending down.

I'll be monitoring these to see what happens upon a "Death Cross" formation, which appears imminent. For now, the trend is still down on all three instruments. I expect that any further decline in commodities will drag U.S. equities down, as well. 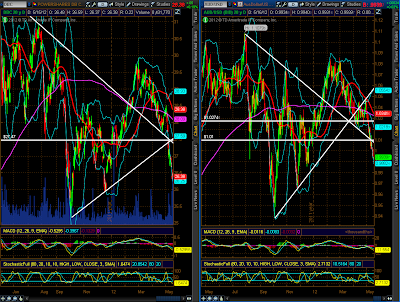