One of my favorite scientific ideas is the Schrodinger's Cat theoretical experiment. This is an illustration of Erwin Schrodinger's 1935 proposition of the quantum (physics) theory of superposition. The way it works is that a living cat is placed into a closed steel chamber, along with a device containing a vial of a radioactive substance. If the radioactive substance decays during the test period, then a relay mechanism will trigger the device and kill the cat.

The observer cannot know whether this has happened, and whether the cat is dead or alive, until the container is opened. Since the fate of the cat is unknown, in quantum terms, the cat is neither dead nor alive, and is instead in a superposition of states, or alternatively a cloud of relative probabilities, until the box is opened, and the condition of the cat is observed, crystallizing one outcome or the other. Obviously the experiment sounds pretty tough on the cat, but it's well demonstrated that while things appear to work in a much more deterministic way in the world we see around us, this quantum uncertainty is the way a quantum particle behaves.

Why is this relevant to the markets? Well it sprang to mind looking at the SPX chart this morning, where I can see both a strong bull and strong bear setup, one of which will crystallize over the next couple of days. Hard to say which one yet, and I'm definitely leaning bearish, but I have a series of levels to watch on SPX and the way they perform should determine the outcome.

The bounce I was talking about yesterday morning obviously happened and no technical damage at all has yet been done to the bear case here, with the rally so far failing at Thursday's low, and the close at the middle bollinger band on the daily chart: 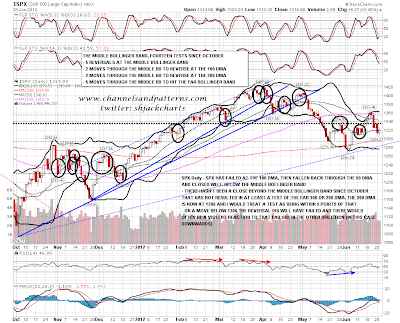 On the 60min chart I have shown that there are two H&S patterns now in play on SPX. You sometimes see this when an H&S pattern is failing, though I would stress that the IHS has not yet failed. The first H&S is the bullish IHS which has been damaged but is still in play as the move down did not go below the bottom of the right shoulder. The second is a bearish sloping H&S forming at a 1310ish neckline. On this scenario we are making the right shoulder now, and the ideal high would be at another retest of the IHS neckline at 1335.

In terms of support a move below 1310 with any conviction will trigger an H&S target at 1255. There are three key resistance levels to watch. The first was reached at yesterday's high, and we might see failure here, though the symmetry of the bearish H&S wouldn't be great. The second is at 1335 and failure there would deliver a very nice bearish H&S. A move over 1335 would start to look bullish but there would be a last main resistance level in the 1346 area, at the double-top valley low for the last high, and (depending when it was reached), at declining resistance from the 1415 high. A break over these would look unambiguously bullish and the reversal IHS would then be back fully in play: 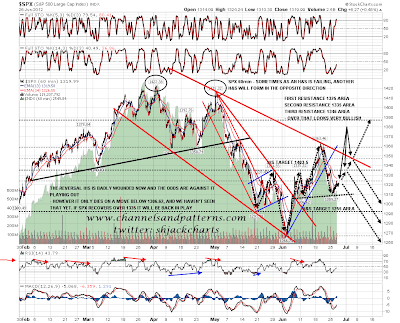 You can see these resistance levels and the bearish H&S forming very clearly on the SPX 15min chart: 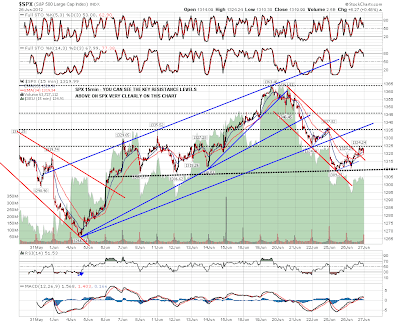 TLT is still in the consolidation range and EURUSD made fresh short term lows yesterday on increasing positive divergence. The longer this continues however the more this divergence will suggest consolidation (before continuation down) rather than reversal. I'm treating this as a broken bear flag at the moment and as long as EURUSD stays under broken flag support in the 1.255 area this looks cautiously bearish:

On the bigger picture I'm expecting EURUSD to reach 1.20 to complete a huge potential H&S pattern indicating to 0.77, but when that will happen exactly is harder to say. I would be very surprised to see the current declining channel break up before then however: 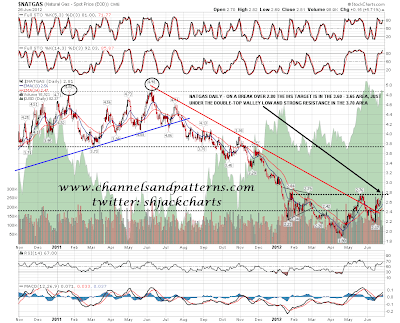 I'm leaning bearish overall here and am leaning towards seeing SPX fail at either the 1335 (preferred) or 1325 resistance levels. An hourly close over 1335 SPX would start to look bullish and a break over 1346 even more so. We need to be aware that there's a possibility that the Euro will be 'saved' again this weekend, with huge pressure being put on the germans to underwrite the debt of their spendthrift neighbours through Eurobonds. This looks like electoral suicide in Germany but it's possible that Merkel may agree nonetheless. I don't think that solution would last but it could trigger a strong rally on EURUSD and equities before it failed.