Further to my last weekly market update, this week's update will be a
very simple top-down look at the 6 Major Indices and 9 Major
Sectors. To keep my analysis simple, I'll be looking at Friday's
closing price relative to its position within the Bollinger Bands (BB) on three
timeframes. The upper BB represents resistance, the middle BB represents either
support or resistance, and the lower BB represents support. Price in between the
middle BB and the upper BB is said to be in the "Bull Zone"
(still under bullish influences/buying pressure with support at the middle BB)
and price in between the lower BB and the middle BB is said to be in
"Bear Zone" (currently under bearish influences/selling
pressure with resistance at the middle BB).

The first three chartgrids
show a Monthly, Weekly, and Daily timeframe for the 6
Major Indices. 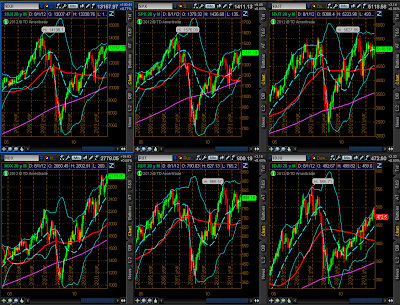 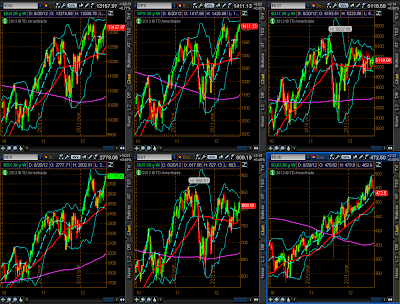 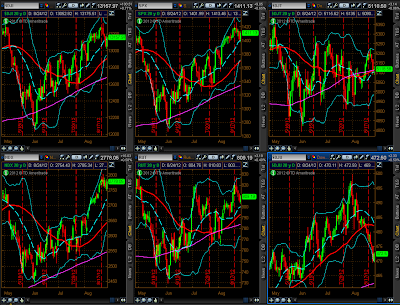 The graph below
depicts percentage gained/lost for the past week for the
Major Indices. Profits were taken in all 6 Indices (with the
least taken in the Nasdaq 100 Index), as some of them met with resistance at the
upper BB. The Nadsaq 100 Index is worth keeping an eye on to see if it can
maintain its bullish lead. 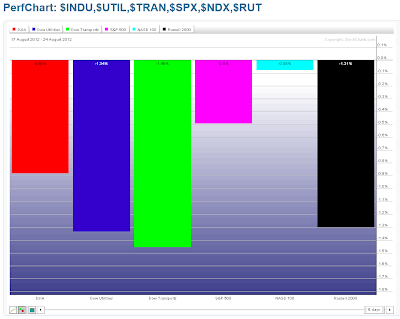 The next three
chartgrids show a Monthly, Weekly, and Daily timeframe for the
9 Major Sectors. 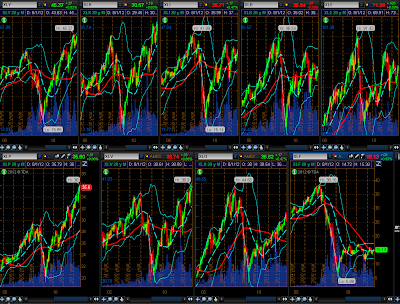 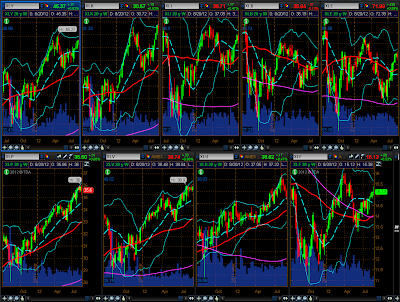 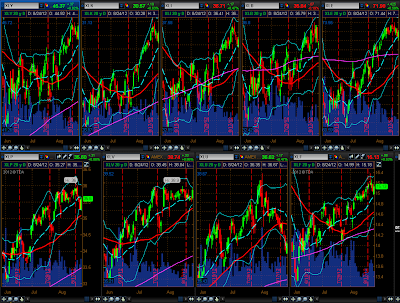 The graph below
depicts percentage gained/lost for the past week for the
Major Sectors. Profits were taken in 7 Sectors, as some of them
met with resistance at the upper BB, while XLF remained flat, and XLV gained on
the week. 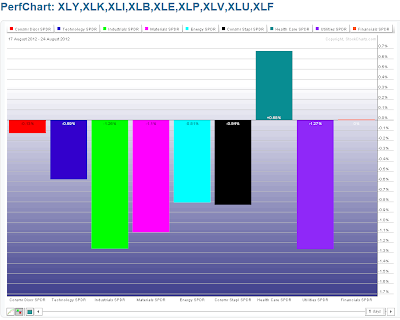 In summary,
and in the coming week(s), it will be important to monitor price action
on all 6 Major Indices and 9 Major Sectors on
all 3 timeframes around the middle BB to try to gauge whether buying pressure
continues to surface at this point, or whether more bearish selling begins to
appear. Furthermore, we'll see whether buying overcomes the resistance of the
upper BB on any retests at this level, firstly, on the Daily timeframe (to gauge
the strength of their support levels from where they bounced on Friday).
Otherwise, I'd look for a retest of this near-term support, and possibly lower
support levels (e.g. the lower BB on the Daily timeframe, or the middle or lower
BB on the Weekly and Monthly timeframes).

Before I conclude this post,
I'll also take a look at where volatility ended on Friday for
the S&P 500 Index and the Russell 2000
Index. The two Daily ratio charts below of
SPX:VIX and RUT:RVX show that price pulled
back after running into major resistance, but both bounced on Friday at their
respective near-term support levels…two to watch to see if volatility
reappears in coming days/weeks. (Please refer to my last weekly market update and to my post of August 15th to get a longer-term perspective on
these charts.) 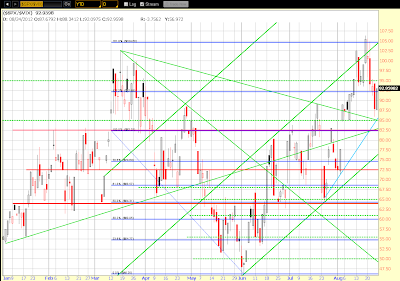 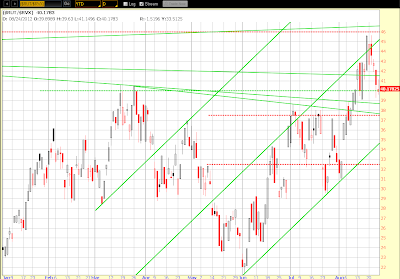 Enjoy your weekend
and best of luck next week!