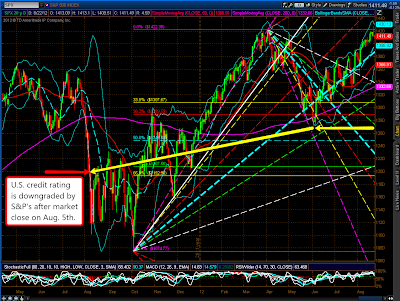 The credit rating has not been upgraded. The Fed also downgraded the economic
outlook at their meeting on August 9, 2011, as mentioned in my post of August 9th. The Fed remains committed to holding
long term interest rates low for the foreseeable future. Europe's economic
condition has weakened. The global economies have slowed. And, finally, the U.S. National Debt
continues to rise (unabated) to all-time highs each second. The Fiscal Cliff
looms. Who is convinced that economic and fiscal conditions have improved since then?
The only ones, so far, have been the buyers above the yellow arrows. No doubt
they will begin to take profits at current levels and re-think their positions
after the next FOMC meeting in September. A drop and hold below June's lows of
this year would confirm that their sentiment has changed.
https://slopeofhope.com/2012/08/whats-really-changed.html
What’s Really Changed?