***[First of all, I'd like to take this opportunity to thank Tim Knight for allowing me to post my articles here…and to thank Slopers for all your kind remarks on my work. You've all made my life easier this year and more fun. As well, I've learned a great deal from others who post here and from those Slopers who participate in the Comments section…thank you!]

"The question will be
whether stability returns to the European markets and whether recent stability
can hold and improve in Emerging Markets for 2012, or whether volatility (VIX)
will rise again…the VIX is still elevated, so there is a good possibility that
it will. No doubt, all market action will be reflective of upcoming world news
events, as well as consumer and investor sentiment, together with risk vs safety
appetite. A couple of gauges that I'll follow in this regard are the VIX, U.S.
$, and Copper, as well as the other instruments noted above. Without benefit of
major Fed QE intervention, I imagine that next year could be
range-bound…within this year's high and low, generally…although unforeseen
catastrophes could send the Major Indices below this year's
lows."

2012 has been slightly quieter — just remove the
words "nuclear reactor meltdowns, and the passing of Steve Jobs," but repeat the
rest. Add to the mix the fact that (a) Central Banks around the world have
poured huge amounts of monetary stimulus into the markets, (b) there have been a
variety of government elections around the world, and (c) the markets have gone
through a Presidential/Congressional election in the U.S. and have faced turmoil
related to the "Fiscal Cliff" and "Debt Ceiling Limit" issues — and you get the
following results on the U.S. Major Indices.

Each candle on the following
charts of the Major Indices represents a 1-Year period. You can see that 2012
closed modestly higher than 2011, but is facing all-time major
resistance. 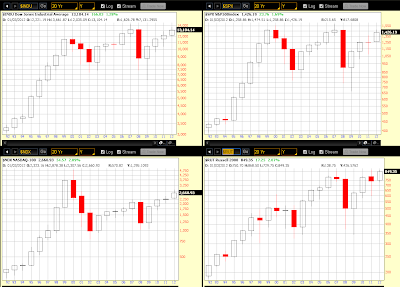 Each candle on the
following charts of the Major Indices represents One Quarter. While Q1 of 2012
made a promising start, the next three quarters really didn't progress any
higher. Instead, they chopped around inside this range and closed near the high
of Q1 on negatively diverging RSI on the Dow 30, S&P 500, and Russell 2000
Indices, while the Nasdaq 100 Index closed a bit below on falling RSI. The Q4
candle ended the year as a bearish "hanging man." The RSI and "hanging man"
issues are signalling caution here for the bull case. 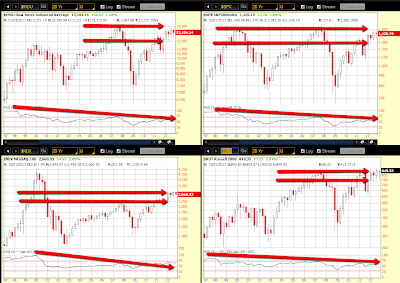 The following graphs
show percentage gained/lost on the Major Indices for 2012. The Nasdaq 100 made
the most gains, while the Dow 30 made the least. We'll see whether or not buying
picks up in the blue-chip stocks, or whether the markets continue to favour the
more risk-oriented stocks in the Nasdaq 100 and Russell 2000 Indices. 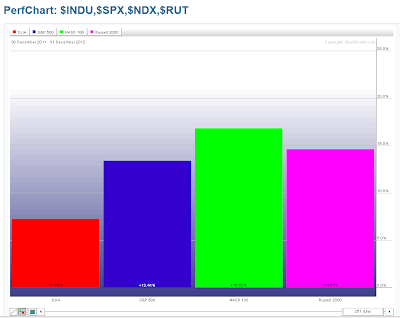 The latest Consumer
Confidence numbers show that, while they were slightly higher in 2012 than 2011,
they have plateaued (and dropped lower this past month) and are still well below
those experienced from 2000 to 2007 (less than half). It's one to watch over the
coming months for signs of either increasing weakness, or renewed strength, and
by how much, inasmuch as such data may have an impact on the markets — as you
can see from the index charts above, the consumer confidence graph for 2012 is
similar to those markets.

In
summary, without the added monetary stimulus from the Fed, the
U.S. markets would have likely pulled back considerably this year due to the
lack of a cohesive fiscal governance of economic policies and programs. Whether
we see any strengthening of bi-partisan ties that produces creative growth policies and programs to provide
sufficient consumer, business, institutional, and domestic and foreign investor
confidence remains to be seen.

If we don't, then I think we'll see a
repeat of choppy, non-directional, and volatile, low-volume market action with
unsustainable follow-through in 2013 — a market that is continued to be ruled
by news headlines and Central Bankers, rather than one that is based on sound
economic conditions and individual company fundamentals.

If the
in-fighting that we've witnessed in the "Debt Ceiling Limit" debate and "Fiscal
Cliff" discussions are any indication (both of which are still unresolved as at
Monday's market close), I think they are a snapshot of what is to come for 2013
and, likely, until the next Presidential/Congressional election — there seems
to be a growing bitter divide between parties, and even among members in the
same party. Therefore, I think the latter scenario will dominate market action
for the next four years, particularly since these markets are at all-time major
resistance…I hope I'm wrong, since I'd like to see everyone do well.

As
I mentioned in my post of December 28th, I'll be watching the
Index/Volatility Ratio Charts, 30-Year Bonds, the U.S. $, and the "Fed Monetary
Stimulus Program Canaries" to gauge short-term market sentiment for equities.

***Thank you for your kind
support this year. Happy New Year 2013! I wish each and
everyone much peace, prosperity, good health, and happiness! 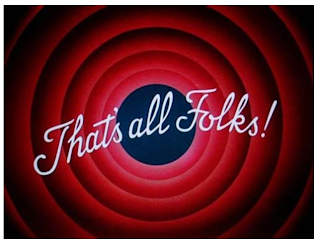