This has been a very impulsive move up from the low last Friday. Statistically yesterday should have been a retracement or consolidation day but instead we saw a strong move up and SPX punched through the daily upper bollinger band and closed well above it. So where does that leave us this morning?

These strong punches above the daily bollinger band are relatively rare, but they still happen fairly regularly. Since July 2011 there have been five previous instances where this happened as I have marked on the chart below. Of these five , three were close to significant highs but not one was immediately followed by a retracement of any significance. Three saw flat closes the next day with the other two closing significantly in the green. Historically there is therefore no reason to think that we saw any kind of significant high yesterday. Here's how that looks on the SPX daily chart: 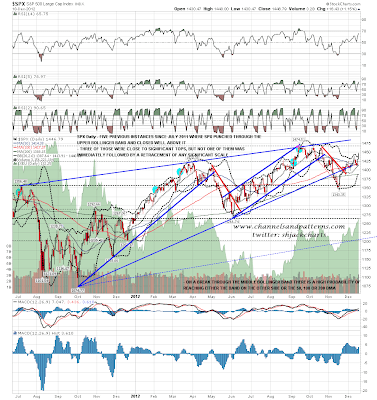 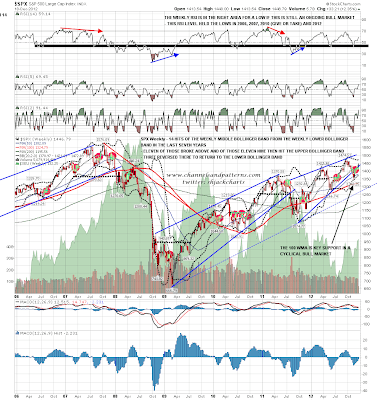 I've led with these two charts to give a backdrop for the rest of the charts today, as they are still pointing upwards and I know some were thinking yesterday that the close well above the daily bollinger band was a signal that a significant high was very close. Close perhaps, but not likely to be right here. The odds favor significantly more upside, though we could see an interim or major high in late December or early January. That may favor the bears overall for next year, as the January close is widely watched as the 'January Barometer', and a January that closes red would suggest that 2013 may well also close red.

On the NDX chart the IHS looks unreliable, as I've said before. There is a better version on the COMPQ that I'll show tomorrow though, and this is at least worth bearing in mind. What we did see yesterday however was the bullish rectangle break up and that has a target in the 2770 area. I've found these to be reliable performers in the past: 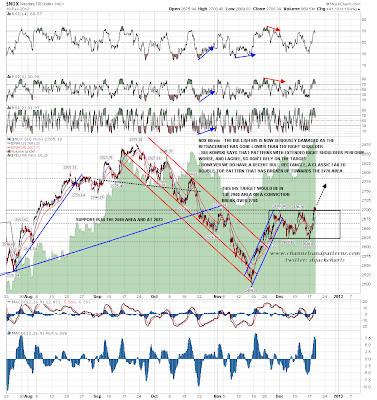 I was outlining the bullish setup on AAPL yesterday morning and that has now strengthened considerably with a clear break over short term declining (and possibly falling wedge) resistance. I'm expecting more upside. Resistance is in the 555 and 595 areas and on a break over 600 I'll be looking for a double-bottom target at 687: 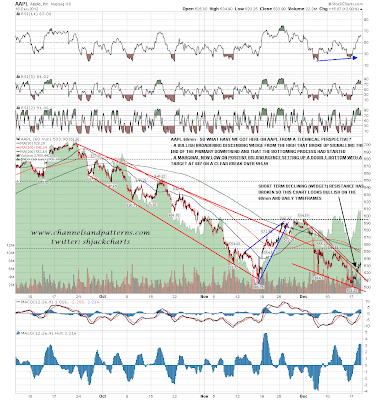 Just to add to this already disturbingly powerful bull move, my EURUSD rising channel broke up overnight, and I no longer have an obvious target there. I won't show that chart today as I'll show the DX chart instead. I first sketched a path for the possible H&S forming on USD in September after the previous uptrend broke down and the first low of the new downtrend had been made. I've posted updates a few times since but with the break up on EURUSD this pattern has now almost been completed. I have the key support area in the 78.85 to 79 range, and on a clear break below the H&S target is in the 73.2 area. If we see this H&S break downwards I would expect the USD downtrend to continue strongly for several more months. Until the neckline breaks USD bulls still have a shot, though the odds are stacked against them both technically and fundamentally. Previous periods of massive money printing by the Fed have seen major declines on USD, which is only to be expected as money printing is devaluation:

CL tested the resistance trendline on the large declining channel there yesterday, and then broke up overnight. This kills off the bear scenario on CL in my view and the picture there now looks bullish. Overhead resistance is in the 90.2 and 94.8 areas and I'm looking mainly at that upper target:

I haven't been posting shorter term bond charts much recently and that's because there hasn't been much of interest happening there from a trendline or pattern perspective. My overall take on bonds however is very bearish here, and the reason for that can be seen on the amazing 32yr bull market channel on USD (30yr Treasuries), shown below on the monthly chart. As you can see, USD has hit channel resistance from 1980 earlier this year and I've been looking for a last move up for a double-top to form here, or a move back down to the 136.5 area to the possible H&S neckline there. I'm leaning towards the latter scenario,and if USB can close a month below 145 I'll be expecting to see that happen: 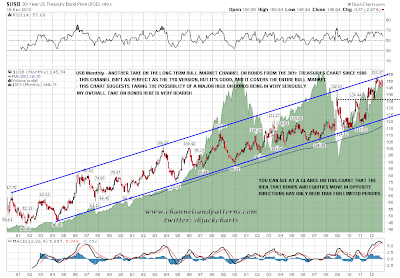 Gold has finally made it to my target at the very important support/resistance level at the 150 DMA. That was tested yesterday and is holding so far. If it breaks the next target is declining channel support in the 1630 area, and if it holds then a break above the declining channel should signal that the uptrend has resumed. I remain bullish overall on gold, and if we are to see a big decline on USD over the next few months, even more so: 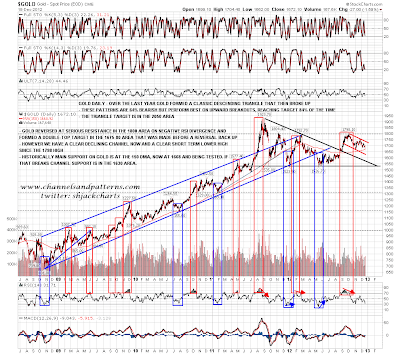 The odds favor a flat or green close today, and the structure of bull trends favors retracements near the open followed by strength for the rest of the day. Three of the five daily punches that I looked at on the first chart traded significantly above the previous day's close the next day, and only one of those three returned for a flat close. I have some trendline support on ES in the 1439 area, and stronger support in the 1433-4 area which I would expect to hold today.