Just a short post today, as I have no plans to trade until after Christmas and I have some last minute Christmas shopping to do. The first thing to say is that I mentioned the 1417.50 ES support level on Friday morning and that has been holding since. It was the low overnight and as long as that holds I'm leaning bullish today. I don't think there's either much time or the seasonality for a definite break downwards to happen today. Dow has been up 5 of that last 5 Christmas Eve trading days and I'm not expecting much different today:

One thing I do want to talk about today is the large amount of downside risk here. When the markets were dropping in November I was saying repeatedly that there was no viable topping pattern on SPX as yet to suggest that the September QE high was of much significance. I mentioned on Friday, and I'll repeat today, that is no longer the case. SPX generally tops out with either an H&S or a double-top, and there is now a technically valid possible double-top between the September and December highs. The target would be in the 1210-15 area on a break below the November lows and it's striking that if the rising wedge from October 2011 were to evolve into a rising channel, then channel support is currently just under that target.

We haven't yet seen a clear second break below the rising wedge as yet, but we are testing that trendline. If the is no fiscal cliff agreement and we see that clear second break, then there is a clear technical pathway back into the low 1200s on SPX, and that would very much need to be borne in mind: 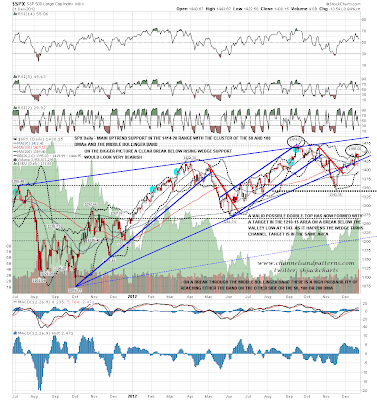 The Vix chart was very striking on Friday. Vix opened with a two to three standard deviation move up past the daily upper bollinger band, and then retreated for the rest of the day to close just above the upper band. This may be setting up a Vix Buy (equities) Signal but I'd be more inclined to take it as a signal that confidence here is very fragile. The last move that was at all equivalent however did mark a significant low and I've marked that on the Vix daily chart below: 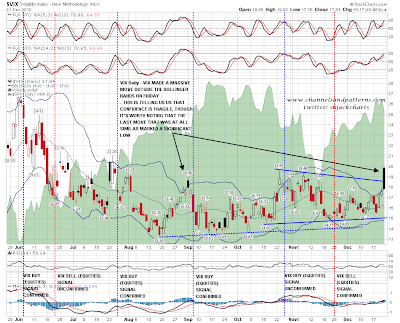 I'm not sure what's happening on EURUSD today, but I will post the CL chart, where the retracement on Friday bottomed out where I expected and a strong short term support trendline has been established. As long as that holds I'm leaning bullish short term. A break below that trendline would invite yet another test of key support in the 85.15 to 85.75 area:

There is a lot of downside risk here, and a failure to agree an alternative to the fiscal cliff could provide the downside trigger for a very significant decline on equities in January. Right now the prospects for such an agreement look dim. I would be very cautious about being heavily long here though, for today at least, the odds favor a sideways to up day as long as 1417.50 holds on SPX. Everyone have a great Xmas or holiday and my next post will be on Thursday 🙂