My musings on the possibility of reversal yesterday morning were obviously well founded, and SPX reversed hard after the morning push up to put in a bearish engulfing candlestick for the day. That doesn't mean we see a down day today but we will most likely see more downside over the next few days. We are now at the point where we will see either the bull or bear scenarios for the next few weeks start to play out, and with congress in recess in a week the trigger for which one will play out may well be the outcome of the fiscal cliff negotiations by that point.

On the weekly SPX chart SPX is finding resistance at the middle bollinger band, which is the obvious reversal level if we are to see further declines into Xmas. Support there is at the 50 WMA at 1375, but if we see a move that far on a daily closing basis we'll most likely see a move to the lower weekly bollinger band in the 1363 area: 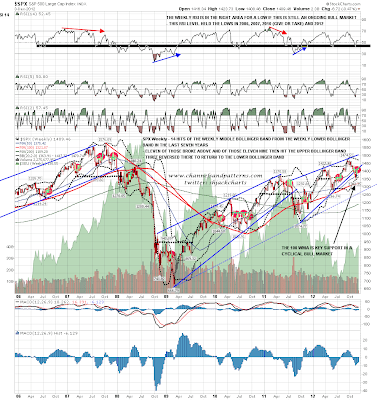 On the SPX daily chart the close yesterday was at the recovered rising wedge support trendline. On a break below the obvious support levels are the middle bollinger band at 1392.5 and the 200 DMA at 1385. For the bull scenario I would like to see strong support in the 1390 area hold on a daily close basis and ideally on an hourly close basis as well: 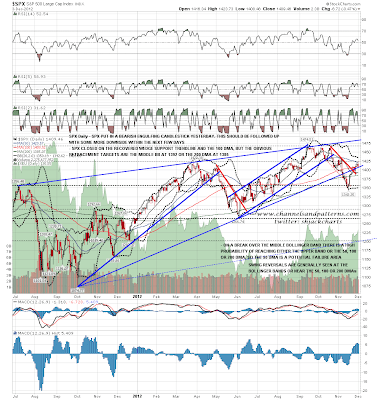 On the SPX 15min chart the rising channel from the low has broken. This is short term bearish and suggests that we may well retest key support, and the IHS neckline, in the 1390 area over the next few days. There is some support around 1400 and if we see a strong bounce today, there is resistance in the 1420 area: 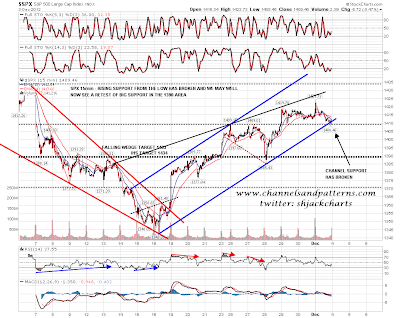 On the ES 60min chart there is a rising wedge that hasn't quite yet broken down, though I'm expecting it to. The full technical wedge target when it does will be a full retracement into the 1340 area, but wedges, while they tend to deliver decent moves, aren't at all good at making target. Key support and my bull/bear line remains in the 1385-8 ES area, and that is the area I'll be watching. Above there the bull scenario into Xmas is still looking good, on a break below the bear scenario will be looking increasingly likely:

I have a key index that I've been watching for the bull scenario, and that is NDX rather than SPX. The high yesterday there was the 2700 area hit that I have been looking for as an ideal potential neckline hit, and on the bull scenario we would see a retracement into the 2636 area over the next few days to make the right shoulder on this pattern. If we see reversal there and a break up, the pattern target would be over 2900 at new highs. If we saw continuation below 2600 then we would most likely see at least a retest of the recent lows: 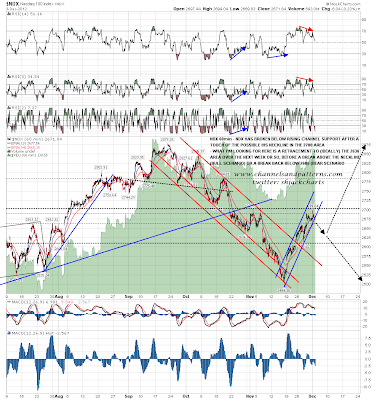 Looking at other markets EURUSD shrugged off the bearish looking setup yesterday morning and looks likely to test the 1.31 level soon. I won't show that chart today as I'll show the DX chart, where I have been posting the possible H&S forming there every few days for the last few weeks. The neckline is currently at 78.9, but you can see from the left shoulder that the right shoulder may take several more weeks to form and rally into the 82 level. Will this pattern complete and play out? Very possibly, as Ben Bernanke seems determined to keep the printing presses turned on fully, and money printing is of course a method of devaluation. If the pattern plays out the target would be in the 73.2 area slightly above the 2011 lows:

I was saying yesterday morning that CL looked likely to reverse soon but that I would like to see at least a test of the 89.7 area before it did. CL then put in a higher high slightly over 90 before reversing hard. CL has been making higher lows and highs, a falling wedge from the September high has broken up, and a complex double-bottom or IHS (marginal as the right shoulder low was very close to the actual low) has formed with a target in the 94.3 area on a clear break over 90. I am looking for another higher low over 85.4 before this bull setup most likely plays out. Main support is in the 85 area:

I am leaning strongly towards the overall bull scenario here on SPX and CL particularly, and am hoping for SPX to test the strong 1390 area support to provide an ideal long entry into Xmas and January. Obviously news may derail this bull scenario and we'll see how that goes. If the 1390 SPX support area is broken with any confidence then the bear scenario will look much more likely than it does at the moment. For today I am looking for some strength with a most likely green or flat close, a strong bounce to short would be nice, but ES will have to get over immediate resistance in the 1410 area to deliver that.