This has been an ugly decline on equities so far, in the sense that there hasn't been much that has developed in the way of trendlines and therefore patterns. That is ominous, as I often see this near the start of a strong trend, before the large trendlines for that trend have started to clarify. 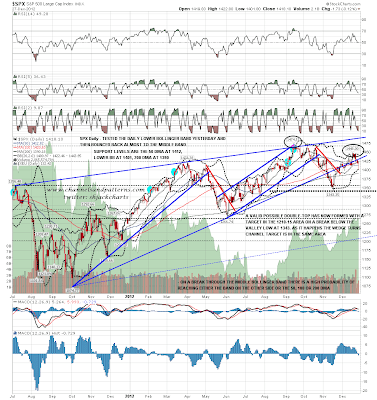 I was talking about the possible major double-top on SPX on Monday and last week. I've stripped that out from my main daily chart to have a closer look at that today. You can see that there is a clear rising wedge from the October 2011 low that has broken down and, as I said when it broke down in November, the first break generally signals the start of a topping process.

When this happens you look for a reversal pattern to develop, and in the case of SPX, that would generally be an H&S or a double-top. We now have that viable double-top, and a strong second break below rising wedge support would look potentially very bearish. I'm seeing the make or break level for the bears here at the 200 DMA at 1390. A close and hold below there invites a test of the November lows. A break below the November lows targets the 1210-15 area, which is also the area for this rising wedge to evolve into a rising channel. I'm not wild about the seasonal timing for this, but I'm definitely taking this scenario seriously: 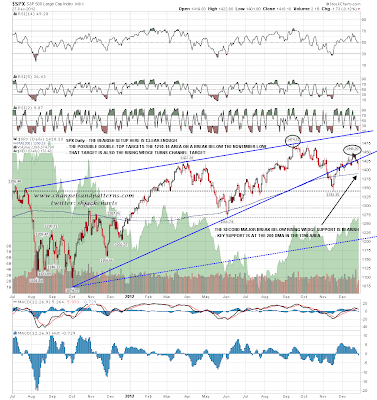 A test of the 200 DMA at 1390 SPX would fit with strong support on ES in the 1388 area. This is a key support area. Short term, while ES is making lower lows and highs, this downtrend needs to be respected, and there is as yet no positive divergence on the 60min RSI:

NDX broke below 2620 support yesterday and that was a significant looking lower low. Looking at the NDX chart there was obviously a bullish IHS that formed, broke up, and failed. This often leads to a strong reaction in the opposite direction. If AAPL loses the 500 support level, this setup is arguing for a test of the November lows: 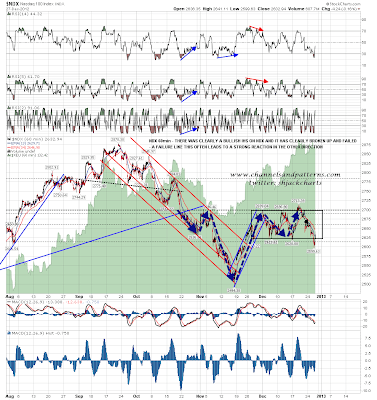 I was looking for a test of the last highs on EURUSD, but there is already a viable possible double-top in place on EURUSD. The target is the strong support area around 1.30 on a conviction break below 1.3157:

On CL the decline yesterday found support at former resistance in the 90.2 area before making a marginal new high. RSI negative divergence is very strong, and on a break below 90 there is a double-top target in the 88.5 area, though to get there strong rising channel support at 89 would need to break:

SPX hit daily lower bollinger band support yesterday, and that's only 11 points above the 200 DMA at 1390. We may well see that 1390 level tested in the next two or three trading days, and that is a very key level both as the 200 DMA, and for the strong level support in the same area. That level is make or break for the bear scenario here in my view.