The main charts I am watching at the moment are the NDX and NQ charts, to see whether and when the fully formed IHS there breaks the 2700 area neckline to confirm the bullish scenario from there. We didn't see that yesterday on FOMC and Bernanke's press conference, but then he had little new to say, as the talk of QE being open ended until a significant reduction in unemployment has been seen sounded similar to what he was saying in September. Here is the setup on the NDX 60min chart where resistance is in the 2700 area, first support is at broken resistance in the 2660 area, and key support is at 2623, as a move lower than that would trigger a double-top target in the 2550 area: 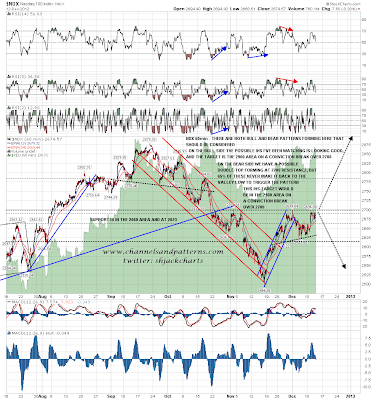 The SPX 60min chart looks short term bearish here. The IHS and falling wedge targets in the 1433/4 area have now been made, and the high yesterday was on clearly negative 60min RSI divergence. I have rising support from the November low in the 1425 area and that might provide some support, as may broken resistance in the 1420 area. No decent support trendline from the low has been established yet however and you can see that the current rising support trendline is much steeper than the one from June. We may see a deeper retracement to establish a more sustainable support trendline: 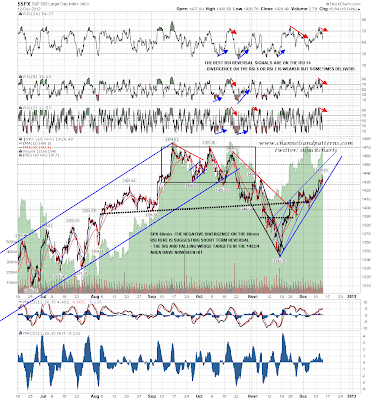 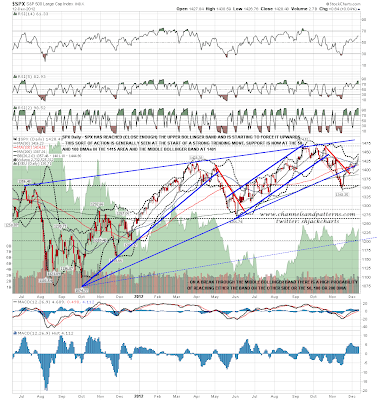 I won't show the Vix, TLT and CL charts today as there's not much to see there. TLT is retesting the 122.7 area where I have the most significant support/resistance level of the last few months (broken eight times so far though) and Vix is hugging the underside of the daily middle bollinger band. CL tested 87.5 area resistance yesterday and the bounce may have ended there. EURUSD was showing no signs of reversal yesterday but is showing some this morning, with a nice little double-top formed on negative 60min RSI divergence overnight. EURUSD didn't close an hour below the valley low however and is now bouncing strongly. We could yet see a move to test the last high in the 1.3125 area before a stronger reversal:

The setup on GC looks bearish here as I mentioned the other day. There is a clear declining channel from the 1800 resistance high, and the high on GC yesterday was at the retest of the broken support trendline from the last uptrend. The support levels to watch are the 150 DMA in the 1665 area and declining channel support in the 1640 area:

I don't know whether copper still has much value as a market predictor nowadays but I was looking at a bullish trade setup on copper in a post on November 11th, and that was a few days before the November low on equities. That's now much of the way to the target but still has some upside room. If we do see a pullback over the next few days we might see HG retest broken support in the 355 area from 365 at the moment, and that would be a nice long entry into the main triangle resistance target in the 380 area. Here's that year old triangle on the HG daily chart:

There are clear signs of reversal down short term on the SPX, EURUSD and GC charts and that has me leaning short term bearish this morning. The larger bull scenario on NDX still looks very good here, but as I've been saying, that only triggers on a conviction break over 2700 and, until we see that, the 2700 area remains very strong resistance. We could well see a significant retracement from here, but unless we see NDX break below the last low at 2623, that will look like a dip to buy.