I read on Bloomberg this morning that the Federal Government will reach the borrowing limit on December 31st, and that Geithner will start using extraordinary measures to finance the federal deficit into early 2013. A reminder that unless some sort of bipartisan deal is reached in  the next couple of months, the Federal Government will start to shut down due to lack of funds.

It did strike me though that a possible alternative for Obama is to write off some of the large stock of US treasuries now held by the Fed. I wonder if that would be legal without congressional approval? It could extend the Federal government's borrowing ability considerably further, though it would tear aside the thin fiction that at some point the Fed will release these back into the market, and hasn't been printing money in part to finance these huge deficits.

Be that as it may, on Xmas Eve SPX closed slightly below the daily middle bollinger band and the 100 DMA. It may hold there, though there is further support below at the 50 DMA at 1413. On a break below that the lower bollinger band is at 1400: 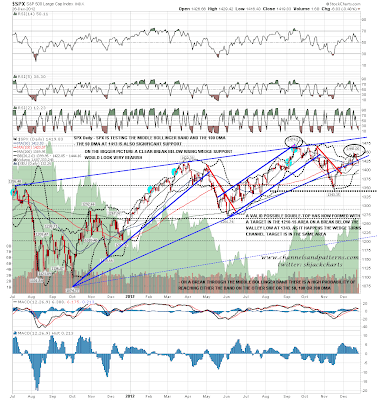 On the SPX 60min chart there is obvious no support trendline from the November low, and since the first push up from there, no such trendline of any weight has formed. However there are shorter term trendlines that are in play, with most likely either a broadening ascending wedge or a sloping H&S forming on a three week support trendline. As long as that holds that looks short term bullish with a target in the 1440 area if a sloping H&S is forming, and at a retest of the September high area if it is a broadening wedge: 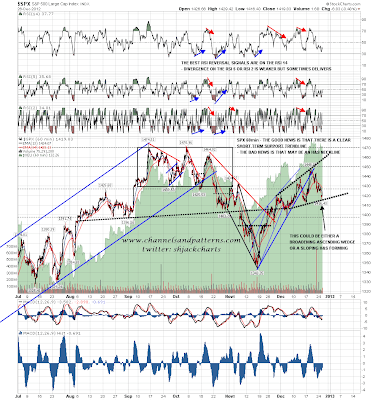 EURUSD is on the way back to retest the last high in the 1.331 area. There is big resistance there as that test should complete the H&S forming on DX. At that point I would expect either a break through or a strong reversal, and in the case of reversal there is obviously now a possible double-top forming for that test:

CL bounced strongly at the short term support trendline I was looking at on Monday, and that may well be the lower trendline on a rising channel. If so CL has hit channel resistance and is showing considerable negative RSI divergence here, so I am looking for a reversal into channel support in the 88.8 to 89 area:

Obviously much depends over the next few days on whether a deal can be struck on the fiscal cliff and the federal debt ceiling. I'm doubtful about that, and a recent poll quoted on Bloomberg says that 48% of the US public don't expect one in the near future. I'm leaning bullish for the rest of this week if ES can recover over 1417.50 by the open and hold over it. If that doesn't happen then I'll be looking for support at either the 50 DMA in the 1413 SPX area or the daily lower bollinger band at 1400 SPX. I would be surprised to see a break much below 1400 without a decent bounce first.

I'm still in holiday mode, hence the shorter post than normal. Of the markets I've looked at this morning only CL is offering a nice looking play, though I'll be watching the likely EURUSD retest of the highs for signs of resistance. A strong break above 1.331 would have big implications for USD into 2013, but until we see that I'll be looking for reversal there.