There are some days when the market moves so fast in the morning that some of my charting time seems wasted, and this is one of those mornings. Since I did my SPX charts ES has spiked up very hard, wiping out all of the losses into the close of last week and reaching a high of 1448.25 this morning. ES is now extremely overbought on the 60min RSI and I'm expecting some retracement, as well as a partial fill of the huge opening gap if ES were to hold the current levels at 1440+ into the open:

A short while ago, when ES was still testing 1424 resistance, I was looking at the setup on the SPX charts and a high confidence target in the 1444 area from the nice looking W bottom that broke up on Monday. I'm expecting this target to be made in trading hours, so if there is a serious compression of the current huge gap before the open, that might still be a long target worth noting: 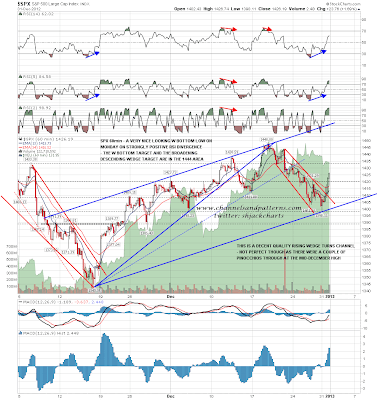 On the SPX daily chart the upper daily bollinger band is at 1445 and we may well see some resistance there. Middle bollinger band support is with the 100 DMA in the 1421-2 area: 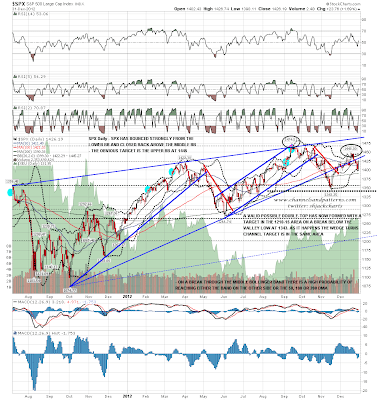 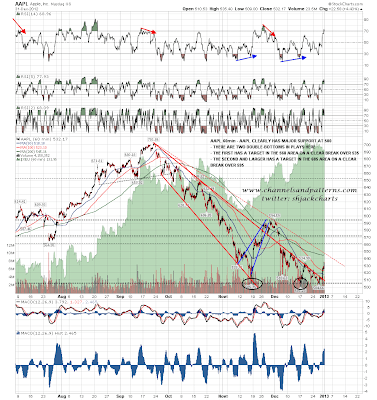 EURUSD spiked up a bit in sympathy with SPX on Monday, but is essentially trading in a range. There is a possible double-top in play with a target in the 1.30 area on a clear break below 1.315, but until we see that break I'm thinking that the next obvious move is up:

CL has established firm support at 90 and is heading up towards resistance in the 94.8 area. This looks like a buy into that target on any pullbacks:

The predictive value of 'Dr' Copper is a bit doubtful nowadays, but it's worth noting that when I recommended this as a long in mid-November, equities bottomed just afterwards. The triangle target for HG is in the 378 area:

So where are markets in the big picture here?  I'm expecting more upside but the overall picture still has some bearish cautionary notes to consider here. I've shown the rising wedge on SPX from the October 2011 low a few times and today I'll show the much cleaner equivalent on the Dow. As you can see below this rising wedge has formed, broken down, and retested perfectly. I'm thinking that a retest of the 2012 highs is very possible ,and perhaps somewhat higher, but as I have said a few times now, the first break down is generally a signal that a topping process has begun. The obvious pattern here is a forming double-top and the second high would normally be within 3% of the first high. Looking at the Dow chart there is also strong resistance at the broken wedge support trendline and that is now just over 13,400: 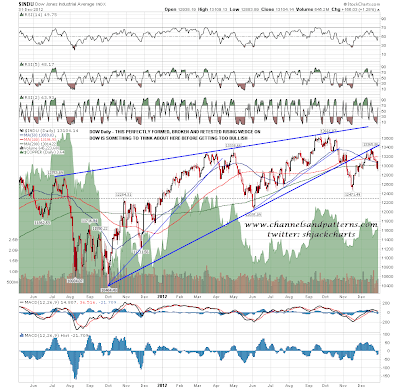 To my eye at least Obama's main negotiating card in these negotiations was the threat that the Bush tax cuts would be allowed to expire, and he has traded that for a few bash the rich tax concessions and a two month delay on spending cuts. I'm wondering how wise that will look at the end of February, when in the absence of further agreement, federal emergency measures to pay bills will run out of room and the government will run out of money. We'll all be watching that with interest.

For today I'm expecting at least an attempt to fill the vast opening gap this morning, and to see 1444 SPX made in trading hours, most likely today. This is most likely a prelude to seeing the 2012 SPX highs tested, but I'm looking for a decent retracement soon to establish a support trendline from the low. Main support on SPX is in the 1421-2 area and I'd expect that to hold on any retracement.