As it was yesterday the technical picture is clear enough this morning. On the 60min chart SPX is now close to retesting both the 2012 high at 1474.51 and channel resistance on the rising channel from the November low. I will be looking for reversal there if that is reached and will assume that the channel will hold unless we see a clear break above it: 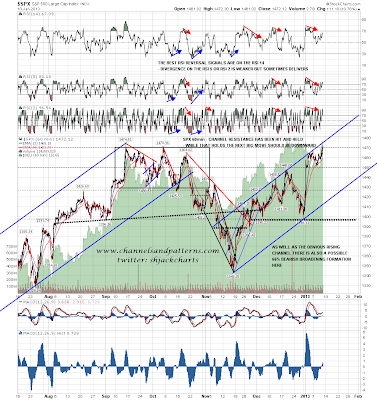 On the 15min chart SPX is within a bearish broadening ascending wedge and main rising channel resistance and wedge resistance will both be in the 1475-7 area today. These wedges break down 73% of the time. As with any bearish pattern though it's important to remember that a 73% bearish history means that these patterns break up 27% of the time. The odds of a break up are a bit higher than that today as the low yesterday didn't reach wedge support. If we see wedge resistance reached today before a touch of wedge support that is a partial decline, signalling an immediate break upwards 35% of the time. As ever these stats come from Bulkowski's outstanding website and the link to the page on these patterns there is here. Wedge support is in the 1462-3 SPX area today and if we see a break below that then the short term high will most likely be in: 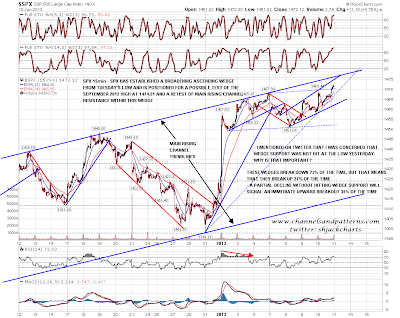 On other markets EURUSD has formed a small candidate double top on strongly negative 60min RSI divergence. The target will be slightly over 1.32 on a clear break below 1.3247, but until we see that break this could be a bull flag forming:

There is no uptrend pattern or channel that I can identify so far on CL. This may well mean of course that this uptrend is at an early stage. Short term we are seeing a sharp reversal from just below the 94.8 resistance area and I would like to see a return to the clear rising support trendline in the 91.45 area. Unless we see a clear break below that trendline that would be a good long entry at that test:

That pretty much wraps it up for the markets today, so I'd like to take this opportunity to talk about RSI divergences, and when they are significant reversal signals. I've been asked about this a couple of times in the last few days and there are some important things to remember when incorporating these into your trading.

The first thing to say is that RSI divergences at tests of highs or lows have no inherent significance. In a solid uptrend you will see shorter term uptrends and retracements, and RSI will continue to rise at each new peak. However you will note that there is an inherent momentum bleed on the RSI to the extent that after a significant retracement, when the current high is tested again RSI will normally be below where it was when that last high was made. There are two main things that make an RSI divergence look significant and they are:

A good example of this is on the AAPL weekly (LOG) chart that I posted on 13th September a few days before the AAPL high. The RSI divergence on this chart was from an RSI peak of well over 80, which is a solid starting point for an RSI divergence as it is rare to see RSI that high. Trendline resistance for the move at the time was also clearly at a level where that RSI peak was unlikely to be exceeded, and the long term history for similar divergences on the AAPL chart showed that every time a similar RSI setup had formed, a significant retracement had followed. It looks on this chart as though the 2010 retracement was small but that is only because this is a LOG scale chart. In fact that retracement was a respectable 15% and the next smallest retracement from this RSI setup was 46%. 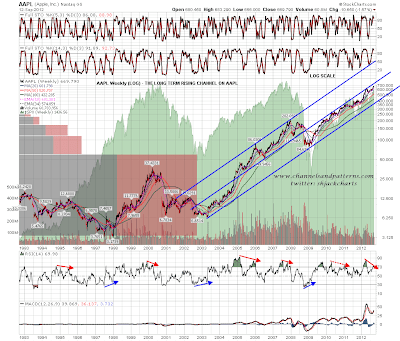 That brings me to the current RSI setup on SPX. As I've noted before, a strong confirmation that a major high or low has been made historically comes with divergence on the SPX weekly RSI. You can see on the seven year chart below that these reversal signals were clear at the 2007 high, the 2009 low, and the 2011 high and low. There were also clear signals of this kind at the 2000 high and 2002 low as well as a string of signals in the mid to late 1990s, all of which preceded significant retracements. There is significant divergence here as well, but it is much weakened by the fact that the weekly RSI on SPX has not reached 70 since the 2011 high.

This doesn't kill the signal entirely, as RSI came close to 70 at both of the 2012 highs, and if you look back you can see that a major low in 1998 was signaled with a weekly RSI divergence when the first low fell short of RSI 30, but this divergence was a solid one on the daily RSI in 1998, and on the daily RSI this time that's not the case. The September high on SPX reached 70 on the daily chart, but the subsequent retracement then went below RSI 30, and as a general rule of thumb the move between the divergent peaks should not go much past 50. Again though that's not a rigid rule, as you can see on the chart above from the lovely double bottom on AAPL in 1997-8, but it makes the current RSI divergence at this test of the last highs the weakest such divergence in the last twenty years, and that needs to be borne in mind.

What the bears do have on their side here is the pattern setup, with the very nice rising wedges that have broken down on SPX and Dow. The pattern setup is similar to that seen on the CL chart above between June and September last year and we may be forming a similar double top here on both SPX and Dow, but you can see from the CL daily chart above that the RSI divergence there was of better quality. Here's the setup on the SPX weekly chart: 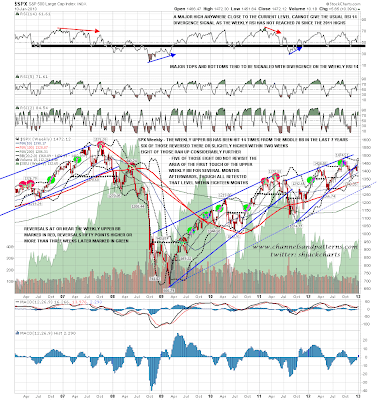 On a pure pattern basis the setup here is a likely double-top forming that would target the low 1200s on SPX on a break below the November low. That could happen, but the RSI divergence setup here isn't supporting that scenario in my view, and that weakens the bear case here. If we should see a reversal here that will strengthen the bear case somewhat. If we should then see a break below the current SPX  rising channel that would strengthen the bear case considerably. If we should then see a clear break below the November lows that was sustained (as the place where double-tops fail is generally just below that break), then I would be looking for that move to the low 1200s. We shall see.

I'm hoping that my explanation for RSI divergences here doesn't seem too mushy, but in all types of TA there are exceptions, and the experience and judgement of the analyst plays a significant part. That's a good thing actually, as it is the reason that good analysts have not yet been replaced by computers, but it makes it harder to give entirely clear rules.