Most of the US equity indices are looking short term toppy to me here. On SPX the intraday high on Friday was just two points below the test of the September high. We may well see that high at 1474.51 tested today. Daily middle bollinger band support has now risen to 1441: 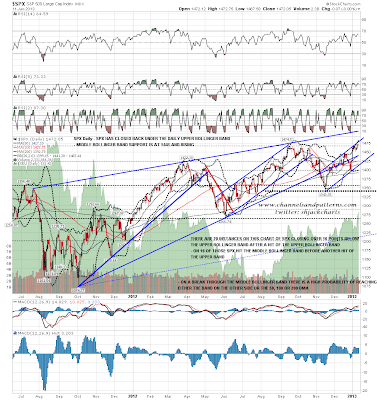 On the SPX 60min chart there is now room within the main rising channel to rise as far as 1478. As long as this rising channel holds the next obvious significant move is down: 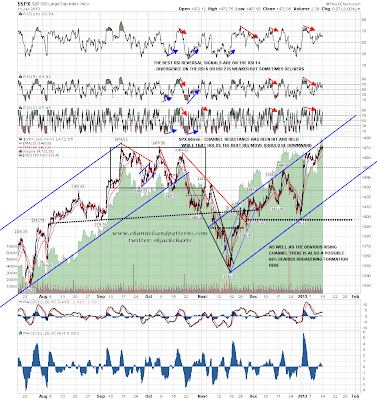 This setup of being just under trendline resistance on strongly negative RSI divergence is echoed across most US equity indices. On NDX the overall pattern looks like an early stage rising wedge with immediate resistance in the 2750 area and a possible double-top forming that would target the 2650 area. If this rising wedge continues to develop I would expect a move to test wedge support next and then a (most likely) last move up to test wedge resistance after that: 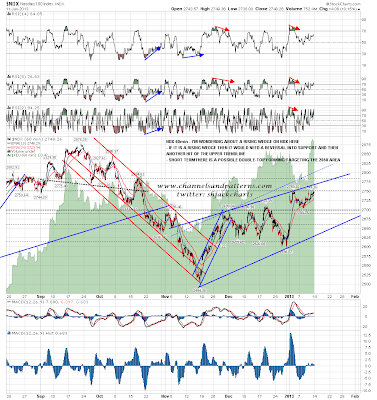 On the RUT 60min there is another rising channel and another possible double-top forming there: 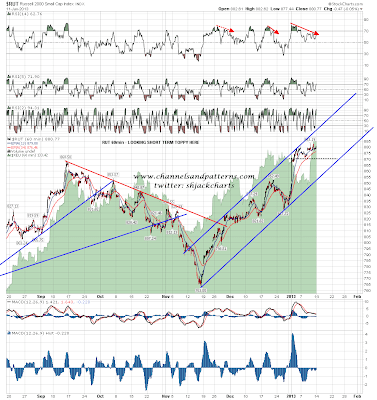 On the TRAN 60min there are clear trendlines, and another possible rising wedge forming. As with the previous three trendline resistance is close and RSI looks toppy: 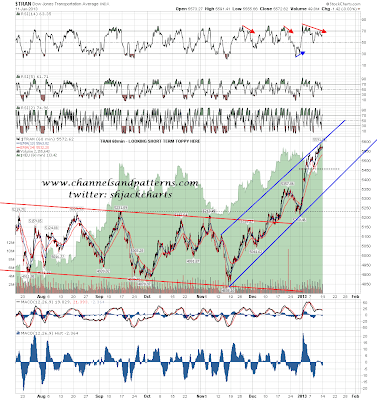 The retracement setup on EURUSD looked promising on Friday morning but I warned that unless there was a clear break downwards the setup might well be a bull flag. That proved to be the case and EURUSD has tested the 1.34 area overnight. The 60min RSI now looks very promising indeed for retracement here, and the rising wedge that has formed on this strong move up has broken down. I'm expecting some retracement here with some support now at broken 1.33 area resistance and main trendline support at 1.305. Longer term the obvious upside target is trendline resistance now in the 1.36 area:

CL is also looking toppy here, but might instead just be consolidating in a range between 92.65 support and 94.8 area resistance. Main rising support is now in the 91.7 area:

I'm expecting to see at least some retracement this week. the setup on NDX best expresses what I'm thinking here over the next few weeks which is retracement shortly, then another move up, most likely to higher highs on both SPX and NDX, and then very possibly a much more serious decline. We'll see how that goes. There is most definitely some weight to this sort of timeline however, as two possible workarounds for the debt ceiling have now been ruled out, with the Treasury rejecting the platinum coin solution and the White House rejecting yesterday a possible attempt to use the 14th Amendment to override Congress, saying that either an agreement would be made with Congress or Congress would 'put the nation into default'. I'm expecting a bruising battle and currently very high levels of complacency about this look overdone.