I have been talking every day about AAPL over the last few days and the reason for that is simple. Unless we are going to see a serious technical breakdown on AAPL the most likely place that the current decline would bottom out is at rising channel support on the weekly (LOG) chart, and that was finally tested on Friday. It is holding so far. Will it continue to hold? Hard to say, but the technical setup here certainly looks promising as I'll detail below.

I was saying a couple of weeks ago that there was not yet a clear pattern for the AAPL decline, and that, as I've mentioned before, is often an indication that it is too early in the trend for the pattern to have become clear. Now though it is clear, and it is a bullish falling wedge. If the current low can hold then there is also very encouraging positive RSI divergence on the daily chart. What AAPL needs to do next is break up from this rising wedge, and if we see that happen, then the low should be in: 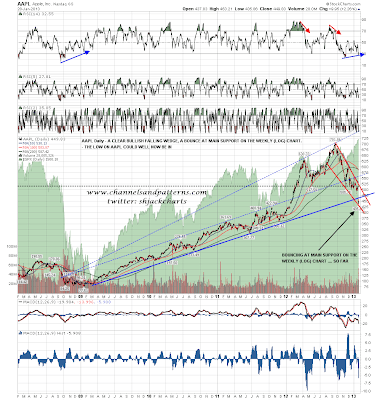 Looking closer on the 60min chart you can see that there is an open gap into the 515 area that could be filled on a bounce here. If that is filled then we will have a break up from this falling wedge. The upper wedge trendline on this pattern isn't perfect, but it is decent and if you look closely at the chart you will see my notes on the short-lived break above the upper trendline: 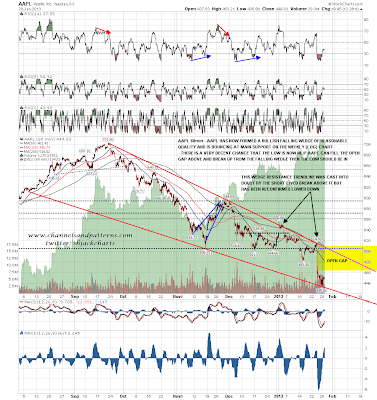 Sentiment is now so bearish on AAPL that it seems hard to imagine that this downtrend could be over, but this is obviously often a contrarian indicator. When I started to predict a likely sharp decline on AAPL in early September sentiment on AAPL was possibly even more bullish than it is now bearish, but sentiment was wrong then. It may well be wrong now.

On the SPX daily chart the RSI 14 is now in significantly overbought territory, and we are now entering my ideal high area (for my bearish double-top scenario) in the 1500-20 range. If we were to see a top form in this range we would ideally see a short term high about here, make a sharp retracement, and then make a slightly higher high on negative RSI divergence. Daily middle bollinger band support is now in the 1470 area and that would be an obvious target. Support at the broken resistance level around the September high is also in the 1470-5 range so that would be both the obvious target and a very possible low area if we see a retracement starting here: 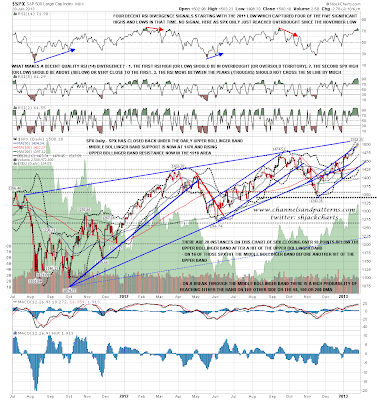 Will we see that retracement? Well the strong negative divergence on the SPX 60min RSI looks promising and there is a possible double-top setup here. On a break below 1490 the initial target would be in the 1480 area. On a break much lower rising support from the November low could be hit in the 1440-5 area, and that would most likely fit with a test of the lower bollinger band on the daily chart: 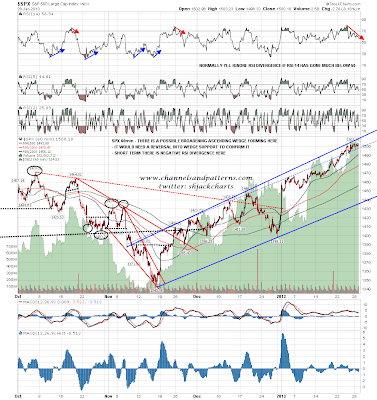 On ES I have sketched in a possible broadening wedge forming if we do see a retracement here. Again there is negative RSI divergence and a possible double-top setup. in addition the 50 hour moving average, support on uptrends, has now been convincingly broken for the first time since the last retracement. I have possible trendline support in the 1480-1 area and that is also the target area for the possible double-top. If a retracement has now begun, then I'll be looking for resistance today near the 50 HMA in the 1496 area:

Any retracement on equities here may well have support from both EURUSD and CL. On EURUSD I have sketched in a possible rising wedge from the 2012 low, and there is clear negative RSI divergence from overbought on the daily chart. Given that EURUSD is also testing a major resistance level and possible IHS neckline here we may well see a sharp retracement from this area. As I have mentioned before, the obvious target for that retracement would be in the 1.26 to 1.27 area. On the overall USD picture here I also noted yesterday that EURUSD has been swimming against the tide since the start of the year, with most other currencies falling sharply against USD over the same period:

CL is consolidating in the 95 to 97 range, and that's not inherently bearish yet. However there is again clear negative RSI divergence on the daily chart and a possible double-top in play. On a break below 95 the double-top target is in the 93 area:

I've said before that an uptrend is defined in large part by retracements, as these establish support trendlines and the lower part of any patterns. Retracements have been rare and short on the current uptrend, and that is making it difficult to judge how far this might go. There is a very good chance that a retracement on ES and SPX is finally starting and obviously I would very much like to see that happen here to give some better definition to this uptrend. I'm leaning short today. Go bears! 🙂

https://slopeofhope.com/2013/01/the-case-for-aapl-by-springheel-jack.html
The Case For AAPL (by Springheel Jack)