Shares of Nuance Communications, Inc. (NUAN) plunged
18.53% Friday after the company lowered its full-year sales and
earnings forecasts. Surprisingly, though, as the screen capture from
Fidelity's website shows, there were more net buy orders from Fidelity clients for Nuance on Friday than for any other stock. 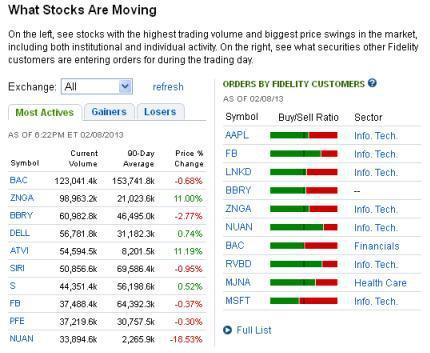 According to Fidelity, 79% of NUAN orders placed by its customers on Friday were buy orders.

Why Consider Hedging NUAN After Its Big Drop

Of
course, it's better to hedge a security before it suffers a big drop,
than after. But given the buy interest shown by retail investors in NUAN
on Friday, and the possibility that NUAN shares may decline further in
the future, in this post we'll look at two ways NUAN investors can hedge
against a greater-than-20% drop in the stock from its current price.

Why Consider Hedging Against A >20% Drop

A
twenty percent decline threshold is worth considering, because it
lowers the cost of hedging somewhat (all things equal, the larger the
potential loss you are looking to hedge against, the less expensive it
is to hedge), and because a 20% decline is not necessarily an
insurmountable one. To recover from a 20% loss, an investor would need a
25% rebound in his stock. But to recover from, say, a 35% drop, would
require a rebound of nearly 54%.

The
first way uses optimal puts*; this way has a cost, but allows uncapped
upside. These are the optimal puts, as of Friday's close, for an
investor looking to hedge 1000 shares of NUAN against a greater-than-20%
drop between now and July 19th: 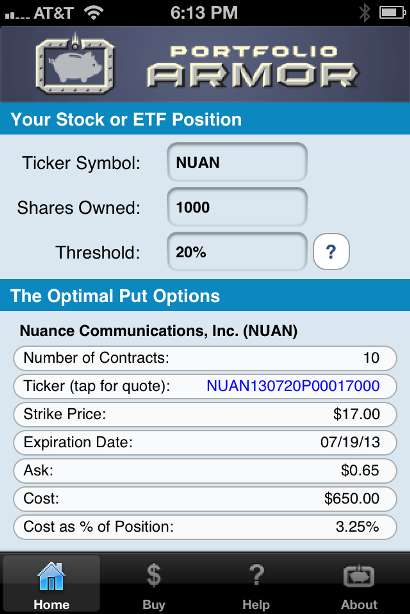 As you can see in the screen capture above, the cost of those optimal puts, as a percentage of position, is 3.25%.
Note that, to be conservative, cost here was calculated using the ask
price of the optimal puts; in practice an investor can often buy puts
for a lower price (i.e., some price between the bid and the ask). By way
of comparison, the current cost of hedging the Nasdaq 100-tracking
PowerShares QQQ Trust ETF (QQQ) against the same decline, over a
somewhat longer time frame (until September 20th), is 1.10% of position
value.

A NUAN investor interested in hedging against the same,
greater-than-20% decline between now and July 19th, but also willing to
cap his potential upside at 19% over that time frame, could use the
optimal collar** below to hedge instead.

As
you can see at the bottom of the screen capture above, the net cost of
this optimal collar is negative — meaning the NUAN investor would be
getting paid to hedge in this case.