Shares of Yahoo!, Inc. (YHOO) hit a 52-week high on Monday — the stock has climbed about 25% since the company announced it had hired Google, Inc. (GOOG) alumna Marissa Mayer as its CEO last July.

Although the last six months have been good for YHOO shareholders, as
the chart above shows, the last six years have been less auspicious for
them, as Tim reminded us in a post last August ("YHOO Ain't A-Goin' Nowhere"). It was six years ago, in 2007, that Microsoft, Inc. (MSFT) first offered to buy Yahoo for about $40 per share. Microsoft offered again to buy Yahoo! in 2008, but Yahoo's then-CEO Jerry Yang, passed on the deal, as Tim also noted in his post.

Hedging YHOO Against A >20% Drop

I've mentioned in previous posts that hedging a stock against a greater-than-20% drop can offer a reasonable compromise between limiting downside risk and lowering the cost of hedging. In this case, it could also serve to keep any YHOO shareholders who jumped on the bandwagon when Mayer was hired in the black: a 20% drop from Monday's closing price would take YHOO shares down to $16.72 — about a dollar above where the shares traded on July 16th, 2012, when Mayer's appointment was announced. 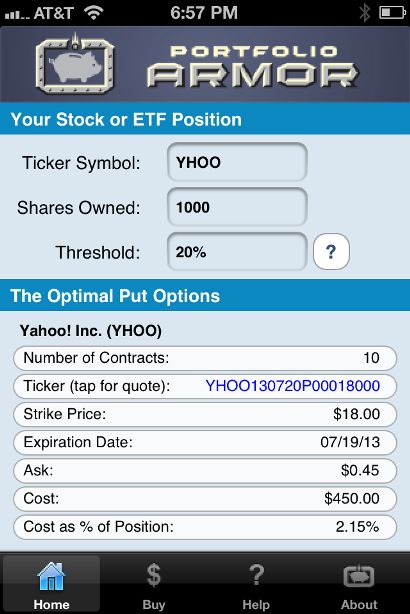 As
you can see in the screen capture above, the cost of those optimal
puts, as a percentage of position, is 2.15%. Note that, to be
conservative, cost here was calculated using the ask price of the
optimal puts; in practice an investor can often buy puts for a lower
price (i.e., some price between the bid and the ask). By way of
comparison, the current cost of hedging the Nasdaq 100-tracking
PowerShares QQQ Trust ETF (QQQ) against the same decline, over a somewhat longer frame (until September 20th), is 1.09% of position value.

A YHOO investor interested in hedging against the same, greater-than-20%
decline between now and July 19th, but also willing to cap his
potential upside at 19% over that time frame, could use the optimal
collar** below to hedge instead.

As
you can see at the bottom of the screen capture above, the net cost of
this optimal collar is negative — meaning the YHOO investor would be
getting paid to hedge in this case.

https://slopeofhope.com/2013/02/locking-in-gains-after-yhoo-hits-a-52-week-high.html
Locking In Gains After YHOO Hits A 52-Week High