The Downside Of Leveraged ETFs

Leveraged ETFs can add some excitement to a
portfolio: bet right on underlying index, and you can earn double or
triple the returns of that index. The downside of leveraged ETFs,
though, is their potential downside. Consider one of the most
widely-traded leveraged ETFs, the Direxion Daily Gold Miners Bull 3X
Shares (NUGT): we're just about six weeks into 2013, and unhedged NUGT
longs who bought the ETF at the beginning of the year are already down
more than 29%, as of Tuesday's close (unhedged longs, that is, who didn't use stops. A quick search of Social Trade shows that the last Sloper who wrote about buying NUGT prudently used a stop order).

Too Expensive To Hedge Against A >20% Drop With Optimal Puts

As
we noted in a recent post, hedging a security against a
greater-than-20%
drop can offer a reasonable compromise between limiting downside risk
and lowering the cost of hedging. Unsurprisingly for such a volatile ETF
(as of Tuesday, the 52-week high
and low prices on NUGT were $26.69 and $7.62, respectively), its
puts are expensive. On Tuesday, NUGT was too expensive to hedge against
a greater-than-20% drop using optimal puts*. That's because the cost of
hedging it against a greater-than-20% drop over the next several months
was itself greater than 20% of position value.

The smallest decline threshold against which it was possible to hedge
NUGT on Tuesday over that time frame was 25%. These were the optimal
puts to hedge 1000 shares of NUGT against a greater-than-25% drop by September 20th, as
of Tuesday's close: 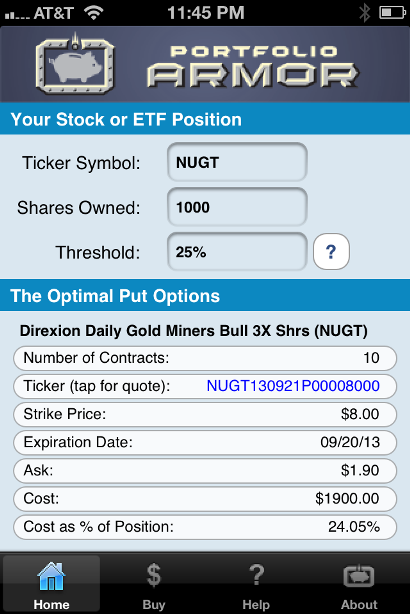 As
you can see in the screen capture above, the cost of those optimal
puts, as a percentage of position, was almost as high as that decline
threshold: 24.05%. It's hard to imagine any investor would want to take a
24% hit to hedge against a >25% drop.

Just as NUGT's puts
were expensive on Tuesday, though, so were its calls. By combining the
right long puts and short calls on NUGT into a collar, an investor could
have dramatically lowered his hedging costs.

Not Too Expensive To Hedge With Optimal Collars

A NUGT investor interested in hedging against a greater-than-20%
decline between now and September 20th, but also willing to cap his potential
upside at 13% over that time frame, could have used the optimal collar**
below to hedge 1000 shares on Tuesday instead.

As
you can see at the bottom of the screen capture above, the net cost of
this optimal collar is negative — meaning the NUGT investor would be
getting paid to hedge in this case, an amount equal to 6.33% of his position value.

It's worth noting, that, to be conservative, the cost of the puts
above was calculated using their ask price, and, also to be
conservative, the income from the calls was calculated using their bid
price. Since, in practice, an investor can often buy puts for less than
their ask price (i.e., some price between the bid and ask), and an
investor can often sell calls for more than their bid price (again, for
some price between the bid and ask), a NUGT investor opening this
optimal collar on Tuesday would likely have been paid more than 6.33% of
his position to do so.

For the purposes of this example, we'll assume our hypothetical
investor just got paid 6.33% of his position to open that collar. What's
his worst case scenario? That would be his NUGT shares dropping by more
than 20%. If that happened, the investor's losses on the ETF would be
limited to 20%, but remember, he made 6.33% when he opened that collar.
So, taking that into account, his worst case downside here would be a
net loss of 13.67%.

The best case scenario for an investor who opened this collar would
be for NUGT to rise 13% or more. If that happened, the investor's NUGT
shares would get called away, so his upside there would be capped at
13%. But add in the 6.33% the investor made when he opened the collar,
and he would have a total gain of 19.33%