SPX closed at the daily upper bollinger band for the fifth straight day yesterday. There hasn't been as much intraday movement as I expected and a series like this is relatively unusual. I have marked four previous instances on the daily chart below and it's worth noting two things about these. Firstly none of these led to a major high straight afterwards. Secondly all of the previous instances were followed by periods of consolidation or retracement after four to six days: 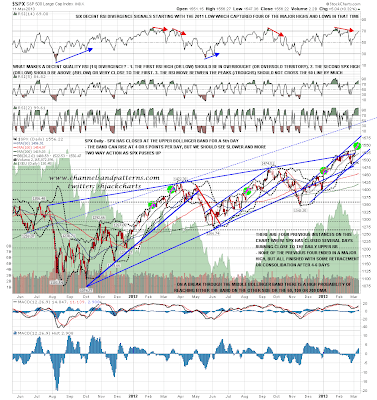 On the SPX 60min chart the RSI is overbought but there is no current divergence. Rising channel resistance is now in the 1570 area, and with the 2000 high at 1553 taken out yesterday it's increasingly likely that we will see a test of the 2007 high within this channel. That level is a strong candidate for the penultimate high for the current run so we may well see a decent retracement there: 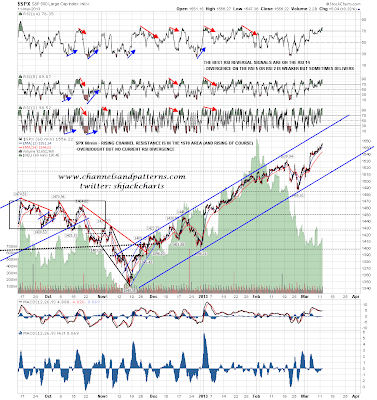 On the ES 60min chart main support is at the 50 hour moving average, as I've been saying every morning since the break over 1530, and that's currently in the 1551 area. There is nothing happening on the bear side until we see a conviction break below that:

CL retraced yesterday, failed to break below 91.2 area support with confidence, and is now most of the way to the 92.9 area double-bottom target. If this is a significant trend reversal, and I think it might well be, then the obvious targets are the possible IHS necklines in the 93.4 and 94.4 areas:

The two candidate double-bottoms referred to in the title however are on EURUSD and AAPL. I've been mentioning the possible bottoming action on EURUSD around 1.30, though I think this is likely to be for a rally rather than significant trend reversal.There is serious resistance around 1.313 and if that is broken the double bottom target will be at the major resistance (and possible IHS neckline) in the 1.33 area:

AAPL is close to a test of falling wedge resistance in the 440 area, though there is also a declining resistance trendline in the 450 area. If AAPL can break over 485 then the double-bottom target will be at the major resistance (and possible IHS neckline) in the 550 area: If we see another up day the daily upper bollinger band should end the day in the 1560-2 area and that will be the target area for the close. The ES 50 HMA is support. Within a couple of days we should pull back from the daily upper bollinger band for a period of sideways consolidation or modest retracement.
https://slopeofhope.com/2013/03/candidate-double-bottoms-by-springheel-jack.html
Candidate Double Bottoms (by Springheel Jack)
Follow @SlopeOfHope
Memberships
Options
SlopeCharts
SlopeRules
TradeMachine