I mentioned yesterday morning that statistically we were likely to be close to a period of retracement or consolidation on ES/SPX, and that has now most likely started. On ES a candidate short term double-top has formed and ES has broken below both the 50 and 100 HMAs. The 200 hour moving average is the other support level to note and that is now in the 1538 area. That's particularly worth noting today as the double-top target on a clear break below 1547.50 is the 1537.50 area which is a close match with the 200 HMA:

SPX closed 8 points below the daily upper bollinger band yesterday, and that is the key signal that we should now be in a retracement or consolidation period. A break back up to close on the daily upper bollinger band (in the 1562-4 area today) would negate that signal but I think that's unlikely. Looking at the four previous examples of this kind of setup that I highlighted yesterday, only one made it all the way back to the middle bollinger band (now in the 1524 area), one traded sideways, and the other two made shallower retracements that fell well short of the middle bollinger band. An average target for these would be in the 1540 area, which again is a decent fit with the possible double-top on ES: 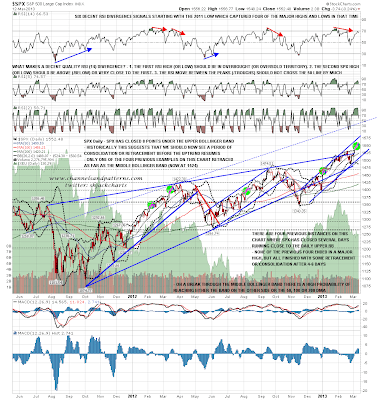 The SPX 15min chart looks interesting, with negative divergence on the 15min RSI that developed with the early high yesterday. These happen regularly and are well worth watching out for. In terms of the pattern setup there is a rising wedge that is strongly reminiscent of the rising wedge on CL at the start of this week. If we see a break below wedge support today I am expecting to see what we saw on CL then, which is a sharp retracement followed by a resumption of the uptrend. Very much a dip to buy IMO. For this scenario wedge support will obviously need to break first: 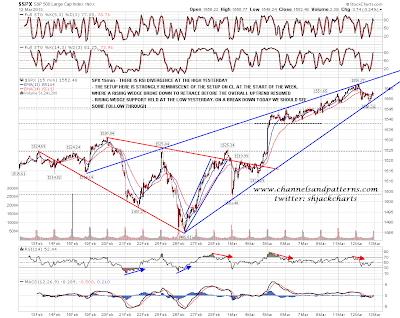 I mentioned yesterday that if we are looking at a significant trend reversal on CL then the obvious targets were the possible IHS necklines in the 93.4 and 94.4 areas. CL reversed close to the 93.4 neckline yesterday and is forming a right shoulder there. That could break up any time, but symmetry would be improved by a right shoulder low near 92 taking another day or two. On a break up the target is in the 97.8 area, in effect a test of the Jan/Feb highs:

EURUSD hasn't broken over the possible double-bottom trigger level there and may not. Certainly the overall trend on USD still looks very bullish and I am expecting USD to go considerably higher. Also 65% of potential double-bottoms and tops never reach the pattern trigger level. This setup is still in play however and strong support is in the 1.2965 area:

AAPL reversed at falling wedge resistance yesterday. Excluding the failed break over this trendline at the start of 2013 there have now been five touches of this trendline since September. That is a lot and I'm expecting this to break up fairly soon. This pattern setup is unambiguously bullish though obviously falling wedges can sometimes break downwards instead of upwards. As the target for a downside break would be in the 100 area though I am really very doubtful about this pattern breaking downwards: 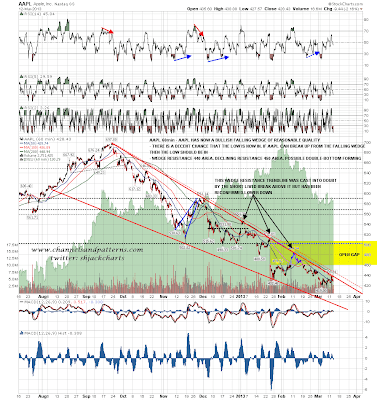 The 50 hour moving average on ES is now at 1553. As long as ES can stay below or around this level the prospects for a consolidation or retracement here look good. On a conviction break back above the 50 HMA, not so much.