There will be some mystified expressions among European bureaucrats this morning after the blow-up over the EU plan to fund the bailout in Cyprus by appropriating up to 10% of bank balances in that EU member. Their confusion has some cause.

Alas not all savers can see the situation so clearly. The stealthy confiscation and redistribution of their assets by states has been pitched to them as not being state-managed theft, and strangely enough many of them have continued to believe that their property rights are still protected and respected by their governments. The EU has forgotten the important principle of successfully boiling frogs, which is that you put the frog into warm water and then increase the heat gradually until the frog dies. At no stage should you scald the frog, which might then realize the danger and jump out of the pot. This attempted confiscation of cash assets in Cyprus has torn away some of the camouflage concealing the vast thefts from savers by their governments in recent years, and I suspect that much of this week will be spent repairing that damage.

In the interim ES fell to test 1530 overnight and has recovered back to just over 1540 at the time of writing. I suspect that this is just an oversold bounce and that there is some further distance to go, though it may not be a great deal more. The fall was signaled on Friday by the break and retest of the rising wedge on the SPX 15min chart. I was looking then at a possible fall to a candidate H&S neckline in the 1548 area and that might still be respected at the open. If it is and this pattern continues to form the ideal right shoulder high would be in the 1555/6 area, and the H&S target would be in the 1533 area: 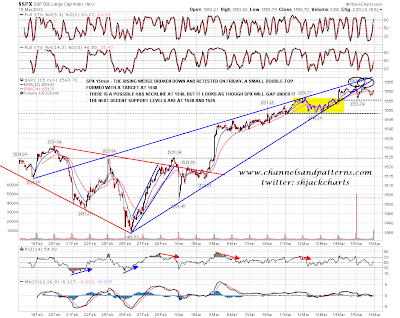 On the SPX 60min chart the potential negative divergence that I was looking at on Friday morning has been confirmed and this would generally deliver a move into the RSI 40 level or below. Rising channel support is in the 1515-20 area but I'd be surprised to see this move get that far. On a break below the rising channel the obvious target would be the potential H&S neckline at 1485: 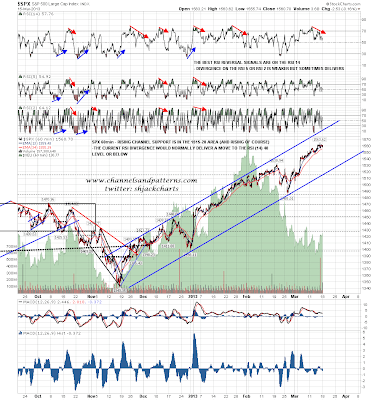 On the SPX daily chart the middle and lower bollinger band support levels are at the 1530 and 1486 levels respectively. These areas are the two main targets for this move with the middle bollinger band being the higher probability target in my view: 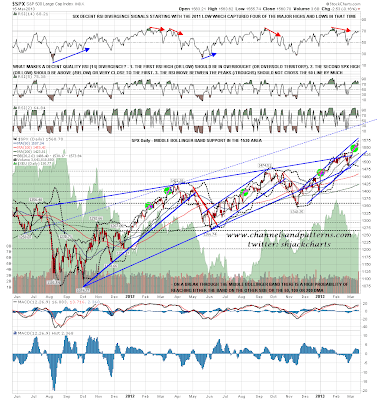 On other markets DX has bounced strongly from short term rising support. With the Europeans now caught robbing their citizens so shamelessly that may be it for the USD retracement:

The really nice bull setup on CL is in major trouble. When double-tops and bottoms fail it tends to be very shortly after the break of the pattern trigger level and that's where CL is failing so far. The nice rising channel on CL has also broken on this retracement and is no longer adding support. Main support is in the 92 area:

AAPL has been falling while equities generally have risen for a few months now. AAPL broke up from the falling wedge and over declining resistance on Friday and the next obvious target is in the 485 area. Could this be a topping signal for equity indices? Perhaps 🙂 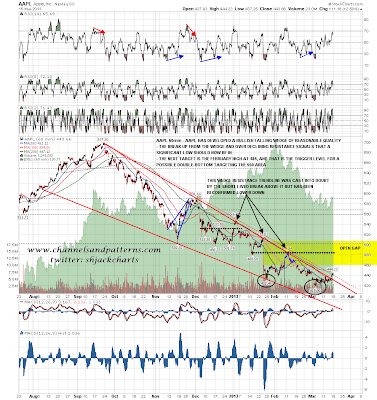 I'm expecting at least some more downside this week and am wondering seriously about the possibility that an H&S will form on SPX at the 1548 neckline. The 50 and 100 hourly MAs on ES are in the 1549 area and I'd like to see ES respect that level on any bounce to keep the outlook bearish for further retracement.