SPX is still close to a test of the 2000 high at 1553. I'm not expecting this to hold long though we could see some retracement there. Meantime the current setup couldn't really be much simpler. On ES the 50 hour moving average is clear support and every small retracement since the break up over 1530 has bottomed there. Until this changes there's really nothing happening on the bear side here:

On the daily SPX chart the last four closes have been close to the daily upper bollinger band, which is holding the rise up. A big break above would signal that a high should be close but meantime this is rising at 4 or 5 points per day and SPX is sticking close to it: 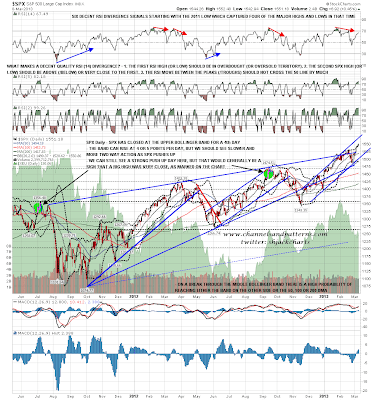 The negative divergence on the 60min RSI has been largely eliminated now. A little remains but that may go today. The current rising channel is important. Channel resistance is now in the 1565-70 area and when we see a break below this channel that will signal that SPX has topped or is in the topping process: 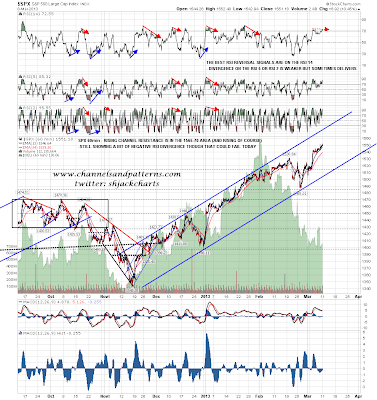 EURUSD is trying to make a low around 1.30. Looking at the DX chart there is still negative daily RSI divergence and we could see a retracement soon with a target at either the 81.5 or 82 support levels. Longer term the double-bottom target and my expectation is a test of the 20122 high just over 84:

I was doubtful on Friday about CL making the double-bottom target in the 92.9 area without a retracement and I was even more doubtful this morning when I saw the clear rising wedge that has formed from the last low. That has now broken down and there is support in the 91.2 area. On a clear break below we could see the downtrend resume:

The last chart and final thought for today is the FTSE weekly chart, when a clear rising wedge has formed since the 2009 low, but wedge resistance is clearly above the 2007 all time high. There is no serious resistance before a test of that high: 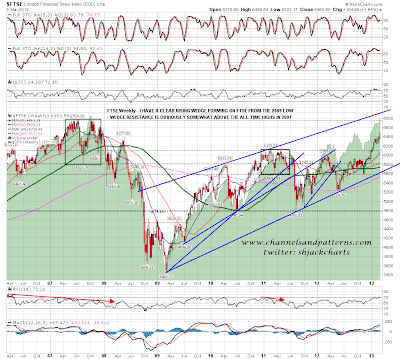 SPX is riding the daily upper bollinger band upwards and this can last a while. Possible resistance at the 2000 high in the 1553 area today and the ES 60min 50 hour moving average is support.