In a recent post (“The Night Is Dark And Full Of Terrors“) we looked at how a couple of hedges could have saved ABX longs from bigger losses last week. BlackBerry (BBRY), which tanked nearly 28% Friday after a revenue miss, offers another example. One difference here is that BlackBerry investors could have gotten paid to hedge a few months ago. I bet many wish they had.

How BlackBerry Longs Could Have Gotten Paid To Hedge

Back in late March, I posted a way BlackBerry longs could get paid to hedge (“It’s Not Too Late For BlackBerry Longs To Hedge“). This was the optimal collar*, as of March 22nd’s close, to hedge 1000 shares of BBRY against a greater-than-20% drop between then and September 20th, while capping potential upside at 20% over the same time frame.

As you can see at the bottom of the screen capture above, the net cost of this optimal collar negative, meaning you would have gotten paid ($230, or 1.54% of position value) to hedge in this case.

How That Optimal Collar Reacted To BBRY’s Drop

The screen capture below shows how the put leg of that collar reacted to BBRY’s drop as of Friday’s close. 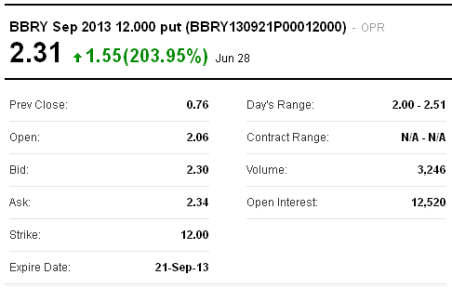 And here is how the call leg of that collar reacted: 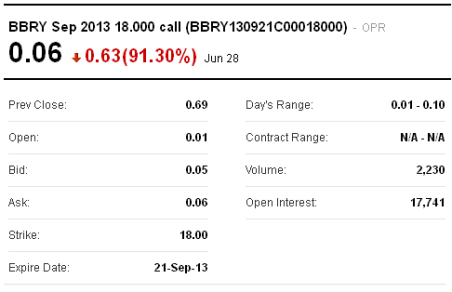 How That Hedge Cushioned BBRY’s Drop

So, although BBRY dropped 29.8% from March 22nd’s close to Friday’s close (June 28th), an investor who opened that collar on March 22nd was only down about 14.7% on his combined hedge + underlying stock position over the same time frame.

Recall that the optimal collar hedge was designed to protect against a greater-than-20% decline. In this case, it limited the investor’s downside to only 14.7%.

*Optimal collars are the ones that will give you the level of protection you want at the lowest net cost, while not limiting your potential upside by more than you specify. The algorithm Portfolio Armor uses to scan for optimal collars was developed in conjunction with a post-doctoral fellow in the financial engineering department at Princeton University. The screen captures above come from the Portfolio Armor iOS app.